Is Carla really all that savvy? 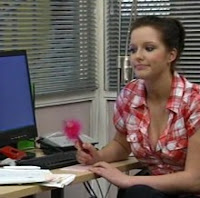 I was thinking about Maria's new job as Underworld P.A. That thought led me down the trail of past Underworld assistants and, you know? There hasn't been a sharp instrument among them, for the most part and I'm beginning to think Carla may not be as finely honed as she might like to think, either.

Let's recount... First, there was Dozie Webster. She showed more cleavage than organization skills. She drooled after her bosses (Liam and Luke) and tried to seduce Tony. She blackmailed Carla over the Liam affair and heaven only knows why she didn't get permanently sacked a half dozen times! She ended up leaving of her own accord.

There have been short term temporary assistants in the persons of Janice, Hayley and Sally. Very short term. Hayley is the most organized but she was mainly the floor supervisor, lending a hand when it came to ushering in clients and making cups of tea. Sally only did the job to fill in for Rosie and never got the job permanently (correct me if I'm mistaken) because none of the owners could stand working in close quarters with her!

Carla then hired Michelle, her former sister-in-law and apparently new BFF. Michelle struggled, flashed a lot of cleavage, and within days, Carla used her to get a new contract from a client, no doubt due to that cleavage. Not really the sort of things a P.A. is supposed to do.

Michelle bogged off with Ciaran on tour and now we have former hairdresser and fluffy-brained Maria, also a former sister-in-law to Carla and newest BFF, which is weird considering Carla had an affair with Maria's husband and Maria couldn't stand her. These things pass, apparently. The same "Let's Make A Deal" with a client is about to happen again. Maria doesn't have cleavage so I'm at a loss to explain this one. 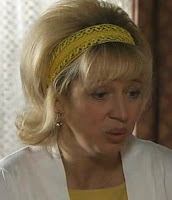 Neither Michelle nor Maria have any experience doing business deals so it doesn't make sense that Carla would throw them to the wolves just because a client fancies the P.A. more than the owner. Is it any wonder that Carla's business is struggling to make a go of it?

She should have hired Julie as the P.A. Julie would have taken those clients in hand, winkled a deal out of them and not taken any funny business off them, either.
Posted by Tvor at 19:58