How do you solve a problem like the Websters? 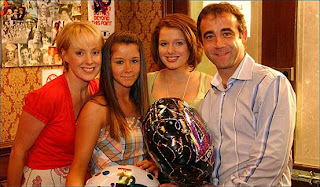 (This post was originally posted by Matt on the Coronation Street Blog in December, 2010.)


It’s fair to say life chez Webster isn’t exactly a bed of roses at the moment. Some people will argue that Kevin deserves everything he gets through proving his inability to keep his manhood in his trousers and fathering a son with his supposed best mate’s wife, which is probably a fair point. Granted Sally hasn’t exactly kept to her marriage vows having had an affair with her boss, but that didn’t result in a child which is now living with the family she betrayed. Kevin asks what he’s supposed to do. Simple, find a B&B and move out!

Part of me does think Kevin should simply move out, but part of me quite enjoyed the truly pathetic bickering between him and Sally last week. When it gets to the point of arguing over who owns the TV and the poufy you may as well call the divorce lawyers there and then! It also says a lot about the situation that Rosie has been the sensible one by retreating to the Grimshaws’ tardis house. Sophie might think of doing the same but as her girlfriend is living there rent free (as Kevin pointed out last night) that’s not really an option.

The Websters are one of the most popular families on the show but they seem to be in tatters. Some people will hope for reconciliation but with events taking place next week I honestly can’t see it happening, again. Put it this way, I can’t see it happening any time soon. Right now Sally can’t even bear to be in the same room as Kevin so it seems incredibly unlikely she would be open to reconciliation any time soon. The only reason Sally allowed Kevin to stay in the house on Christmas Day was because Sophie tearfully begged and I for one wouldn’t be able to refuse a tearful Sophie.

Of course we can only guess what will happen next, but I have a feeling Lloyd’s comment about divorce lawyers loving January may turn out to be true
My personal blog can be found here: http://mjohnson-journalist.blogspot.com/
Posted by Tvor at 21:48