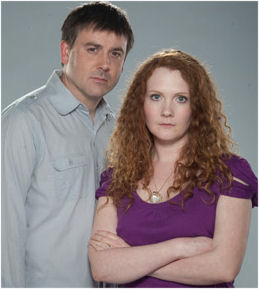 John Stape is broken and in hospital. Poor Fiz, when she had to tell John he needed to go to hospital she looked scared to death. John, as the doctor said, was disassociated and as Fiz said, he just wasn't "there". Graeme Hawley has been playing Stape for a few years now, through one mishap after another, lately more and more twisted and bizarre. The whole Stapewich chronicles has been black comedy, farce and a great storyline to watch. And it's not over yet! John is just having a rest, Trust me on this, there's a long way to go yet.

After all, soap law says he'll have to pay somehow and this breakdown isn't it. Graeme Hawley has been just brilliant as the many sides and moods and extremes of John Stape. The character isn't really  likeable, I find him far too selfish and narcisstic and I hate how Fiz has been reduced to a shadow of her former sparky self by him,  but he's so interesting to watch and that's down to Hawley's fantastic performance.

On my UK blog, I wrote something earlier this year about John Stape and all his adventures to this date. If you want to get back up to speed, have a look. No spoilers there.
Posted by Tvor at 19:25