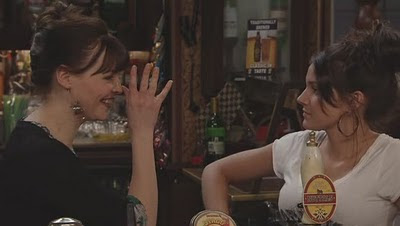 Use whatever you can award: Gold Star: Tracy used the memory of the tram crash victims to try to get Valentine's day off.
Silver Star: Nick. When all else fails, give her a plane ticket.

Ask and ye shall receive award: Gold Star: Sally wonders if she should get a new fella and one walks into the bar and wants to take her out!

Sex Object award: Dubious Star: *Now* Rosie wants to be seen as more than a near-perfect body? Where do i start?

Fashion accessory of the week: Rosie's handbag and that patterned dress was an accessory all on its own! Everyone had red on too, Rosie, Sophie, Leanne's dressing gown.

Grammar Fail award Gold Star: Someone needs to teach Sophie a bit of grammar. She wanted to lend some money *from* her mother... no she said "Off" her mother. And then she tells Sian "this couldn't have come at a more worser time" 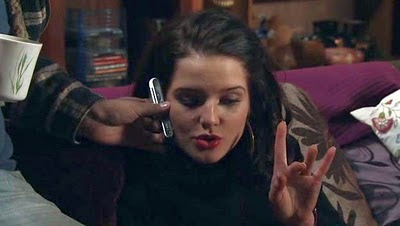 What did your last slave die of? Rosie even has Jason holding her phone for her.

Mrs. Webster's Neighbourhood award: Friendly star: I loved Sally being all trashy and brash and pally with the Windasses to put off the buyers.

Bully of the week: Gold Star: Owen has turned his sights on Gary now Gary's moving in with Izzy.

Too much to hope for award: Gold Star: It figures Tracy would manage to stay out of jail.

Put your big boy/girl pants on and get a grip award: Gold Star: Peter needs therapy more than physio.
Silver star: It's about choice, Sophie. Grow up and make one.

You Idiot award: Gold Star: Steve hiring Tracy so she won't take Amy away. (Mind you, there were a few contenders for this award.)

How can I miss you if you won't go away award: Gold Star: Leanne really, really wants Nick to leave. Lines of the week:
Peter: "I'm anything but ok."
Eddie: "What Claire did was wrong" Tracy: "Thank you." Eddie: "She should have put more shoulder into it, done a proper job."
Rosie: "People have been raising kids for aeons. How hard can it be?"
Sally: "I doubt this will knock my family off the front pages, unless we discover Carla's carrying Peter's baby."
Leanne to Nick: "You were immature, pathetic and manipulative before and you still are."
Leanne to Nick "Peter Barlow is a man. You...You're a selfish, sniveling little Mummy's boy"
Leanne: "You think you're hard, don't you?" Carla: "I've had my moments"
Leanne to Peter: "You didn't fall off the wagon, you were pushed off it"
Peter "Simon's going to be brilliant, if not hilarious as Best Man"
Tracy to Tina "Is your mum still alive? Oh... well 50% isn't bad!" (and that was the nicest thing she said!)
Carla to Leanne "The stench of hypocracy's knocking me sick"
Tracy to Nick "At least i don't wreck people's homes" Nick "No you just batter them to death!" (And isn't Tracy planning to do just that? be a home wrecker by telling Peter?)
Peter "I'm just so lucky!" (Agggghhhh!! Soap Opera Phrase of Doom!)
Rosie "I'm more than just a tomato!" Jason "Yeah but you got some great tomatoes!"
Nick to Leanne "I won't leave without you" (I guess you aren't going anywhere, then)
Peter to Nick "I want you to be me best man" (not what I wanted him to say to Nick and not what Nick expected)
Janice to Leanne "You're going to remember this day for the rest of your life" (Isn't she just!)
Posted by Tvor at 07:30