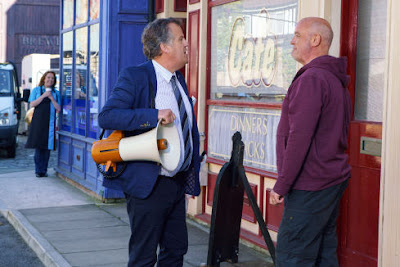 
In next week's Coronation Street, Brian's going to get a bee in his bonnet over the litter left in Weatherfield. And he takes on Pat Phelan, berating the builder with a megaphone. You can read more on that here.

Now then, I like Brian Packham. I like him a lot and I always have done. He fits in well in the tradition of the comedy male that there's always been the likes of in Coronation Street. But I know not everyone agrees with me and judging by the comments left from fans here on the Blog, I might even be in a minority in my appreciation of Brian.