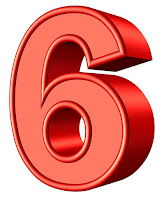 ITV in the UK is going to be airing 6 episodes of Coronation Street and Canadians have been wondering if CBC would keep pace. Wonder no longer. CBC today has announced that as of September 18, it will air Corrie six times a week, adding a second episode on Monday nights.

Now, there's a bit of confusion as to whether we will be caught up completely or not because from various sources, I've heard that the UK will be airing the sixth episode starting later this fall but I've also heard that it won't be until spring. If it isn't going to be until spring, CBC would end up catching up so that we'd have no delay or not much more than one episode delay on par with the UK broadcasts. I can't really see that, can you? It seems too good to be true. Perhaps the correct rumour is the one about the autumn start to ITV's sixth episode. We'll keep you up to date as we hear the news.

Edited to add: CBC replied to my tweet indicating that they will keep the 2 week delay due to distribution timelines. That says to me that ITV will start airing 6 episodes a week around the same time in September. I wonder if Ms. Oates' interview wasn't misconstrued with that major storyline she was talking about that will be aired next year. I guess we'll know closer to the date. 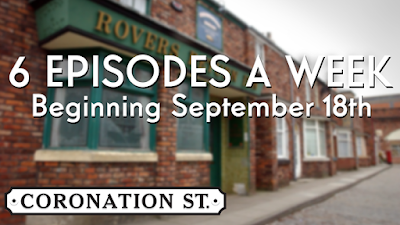 Beginning September 18, CBC brings you 6 episodes of Corrie every week, with a brand-new episode Mondays at 7 (7:30 NT).

You can keep up with the news on their Facebook page, Coronation Street on CBC.

While I can understand that two week delay might be necessary, I really do wish it would be 2 weeks. Our Monday = their Monday, not the last episode of the Friday before being our Monday!

I also wish they would double up on Friday's episode instead of Monday. It would be easier to save it for Saturday tea time then!!

It's not always easy because ITV often adds extra episodes or one hour long episodes along with other schedule changes so it pushes things around. There will be more schedule changes in the UK in early September to accomodate football (soccer) on tv so we may gain or lose an episode over a few weeks.