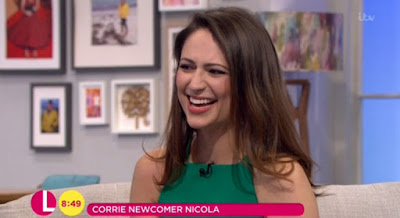 
Nicola Thorp, who plays Nicola Rubinstein on Coronation Street, was interviewed on ITV's Lorraine this morning.

I have to admit I haven't seen this and it's not yet available to view online (at the time of blogging) so I'm relying on our friends at Digital Spy for this news item, with thanks.

During her interview with Lorraine Kelly, Nicola spoke about her character's recent discovery that Pat Phelan is her dad – although she's not aware of just how evil he can be.

And so, the question is whether Pat confesses all to his daughter?

"It's got to come out at some point," hinted Nicola. "He's got two choices; he can either own up to what he's done and hope she loves him for who he is, or does he do everything he can to hide it?

"All of that will be unfolding over the autumn – it's a really exciting time. If you don't already watch Corrie then now is the time to start!

"I can't reveal too much but what is going to happen over the next few months is going to make soap history!"

Elsewhere during the interview, Nicola revealed that she had previously auditioned for Corrie to play another character on the cobbles, Kate Connor – but the role was giving to Faye Brookes instead. Reflecting on why she was turned down, Nicola admitted: "I remember meeting Kym Marsh and I was such a nervous wreck!

"I was sweating so much and I got all my lines wrong. Luckily though, I got another chance two years later and here I am."