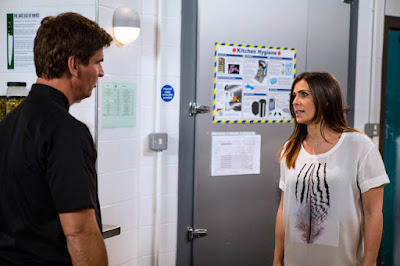 (This post was originally posted by David (Clinkers) on the Coronation Street Blog in August 2017, reposted to this blog with permission.)


It's only natural. There are characters in Weatherfield that mean more to me than others. I've always had a soft spot for 'Munch's Scream in an M&S mac' (Leanne) and Audrey's Noise. I find myself concerned about Rio Rita heading for a possible dementia storyline, despite never being able to forgive her for serving Len a dry dinner in the 1980s (no gravy?)

However, there are a few Street folk whose appearance on screen causes me to glaze over. My shoulders sag, my mouth droops and the scenes roll by without much interest. This tends to happen whenever the Bistro enters stage left. There is just something woefully depressing about the entire set, from its dowdy colours to its perpetually moody staff. If it isn't Zee glowering at an amuse bouche, then it's Daniel gloomily handing someone a menu.

Currently, the dullness has flowered even more courtesy of hurling the unappetising combo of Robert and Michelle into the mix. The whole concept of Robert is a mystery. Carpet fitter turned chef who, apropos of nothing, once enjoyed a spell on the Bolivian Marching Powder and mixed in dodgy circles. Was this post his 1990s charity shop wedding frock Tracy period? Who cares? Robert's woes are many and in true Corrie style, he doesn't appear to be much of a strong man. Instead we see him being propelled by Our Harridan of the Miseries, Michelle. Haven't we suffered enough? Having drained the life out of many scenes in the Rovers (how we loved those moments of violent arm-folding and death stares), she's now camped out in the festering joylessness of the Bistro set. Give it a few more weeks and she'll be approaching every table with a scythe.

It would be easy to say that Michelle is robbing Robert of any spark of joy he had. Sadly, he's never possessed one. It's been one long round of vacant middle-distance stares, moping and self-pity. Shape up or ship out! Yes, this is a drama series and yes, there has to be a plentiful helping of misery for us all to enjoy. However, the unpalatable mix of the Robot, 'chelle and the gloom of the Bistro does not make for an appetising snack.

You totally nailed it.

Michelle and Robert need to "do one" .

Right on SD. Time for this to end. And what a hilarious post clinker. Keep it up.