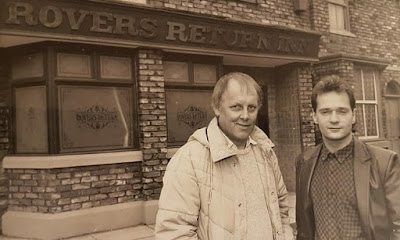 The Guardian carry Tom Elliott's obituary where it details that Tom was responsible for writing the 1986 fire in the Rovers Return that ended with Kevin Webster rescuing a screaming Bet Lynch from the pub – and the actor Julie Goodyear, who played Bet, genuinely fearing for her life when her nightdress caught fire.

Tom Elliott had a talent for putting authentic dialogue into characters’ mouths. “Their speech patterns are in your head, their parlance, how they phrase things – and that’s the way you write it,” he told Melvyn Bragg on the South Bank Show in 1995.

He also channelled his army experience into Percy Sugden, who took pride in his second world war days driving a mobile canteen across the western desert. Abbott recalled Elliott as “an ex-paratrooper, a sturdy bloke, but a soft poet inside”.

Roy Barraclough, who played Alec Gilroy, was a friend of Tom Elliott's and shared a 1987 holiday in Spain with Elliott and his wife. Tom had to keep from Roy the secret that This Is Your Life was planning to spring a surprise on him. A white lie from Coronation Street’s producer meant that Barraclough had to fly back after a couple of days, supposedly to re-record scenes that had been wiped. After being greeted by Eamonn Andrews with the big red book, a furious Barraclough maintained a frosty silence with Elliott for several days, but the friendship survived.

In 1999, two years after leaving the soap, Elliott wrote two episodes of the late-night, six-part spin-off Coronation Street: After Hours. He also spent almost a year (1997-98) on Emmerdale, where his scripts included the first episode filmed on its purpose-built outdoor set.

The obituary in the Guardian also includes some quotes from writer Paul Abbott, who says: "Tom became my boss in the storyline department shortly before Coronation Street turned 25, and so would I. Tom was then double my age but within about three months, we had merged into the same mental age. He was always the guvnor, but the parent-child relationship swung like a pendulum. His mischief and delinquency often put me in charge of best behaviour.

Following EastEnders’ majestic arrival, Corrie geared up to three episodes a week. Press attention on future storylines had never been keener. We had a mole leaking closely guarded material to the papers. Tom and I made a hobby of writing up front pages for fake storylines that we would leave to be read upside-down by a few suspect visitors passing through the story office.

Eventually, all our suspects were actors. They were all shown different stories, but sure enough the upcoming story revelation that hit the papers revealed our mole. We had proved it conclusively. Sadly, the politics of exposing the anonymous actor were deemed too sensitive by people upstairs, just when Corrie and Enders were mounting a face-off. We were told to get on with real work. Tom won the bet.

I do recommend reading the full article at The Guardian website.