Interview: Two men and a little lady in Coronation Street 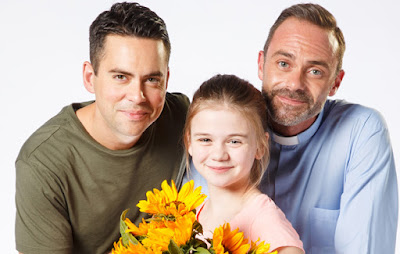 
There's a good interview with Bruno Langley (Todd Grimshaw) and Daniel Brocklebank (Billy Mayhew) in What's on TV this week.

Bruno and Daniel talk about becoming the first same-sex couple in Coronation Street to raise a child together.

Billy and Todd are the first same sex couple in Corrie to raise a child together. How do you feel about that?
Daniel: “Corrie has always been a forerunner in terms of LGBT rights, and I’m thrilled! And I adore working with Bruno, so for us to have this extra layer brought into Billy and Todd’s relationship is great. I would’ve loved to have been a dad, so if this is the closest I ever get to it, then brilliant.”
Bruno: “It’s another bit of Corrie history. The show has been moving with the times since its creation, and it’s just reflecting what’s happening in real life.”

How do you think the other residents will react to Billy and Todd being parents? Will there be a few ruffled feathers?
Daniel: “Of course there will be – surely the point is to ruffle feathers, and I’m sure there’ll be many a whimsical quip coming out of Norris’s lips!”
Bruno: “Do you know what, I don’t think there are going to be any characters saying anything! I can’t imagine a scene where someone’s disgusted with the fact that they’re raising a kid together.”

Todd has a rather chequered past – Bruno, do you think that now he is a father, his dark days are behind him?
“The conundrum is that in order to adopt Summer, Todd has rented a flat with Billy. But if he doesn’t have a good job, he can’t pay for it, and so he’s gone into business with Adam Barlow. I’m not a scriptwriter, but I know there are going to be points where Todd’s morals will be put into question again.”

Now that Billy and Todd are parents, would you like them to seal the deal and get married?
Daniel: “I’d love them to get married, because I’m a hopeless romantic! I also think it would be an interesting thing to highlight with the Church of England, because at the moment, if a gay vicar got married, they’d get fired.”
Bruno: “That would be another bit of history for the show, so I assume that’s probably on the cards at some point. Getting married abroad would be a good idea. How about the south of France?”