Sam Robertson Interview: "I felt like Adam was a spare part" 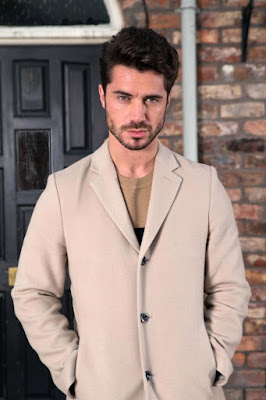 Sam Robertson, who plays Adam Barlow in Coronation Street, was interviewed in the Scottish Sun in which he talks about Adam teaming up with Rosie Webster in the coming weeks.  Adam, he reveals, will also turn his attentions to Eva!

Talking about his first run as Adam Barlow in Coronation Street from 2004 to 2007, Sam admits he got a bit fed up with soap life.

He says: “The trouble ten years ago was that I was on the periphery and when the character was not that involved, it was hard to get momentum going. I don’t think myself or the show’s writers or producers had any idea of who this character was. I said to the producers and casting department that I felt like bit of a spare part the first time around. It was my fear again but it couldn’t be more different this time.

“I’m playing him as charming as possible because at first I was unsure whether I wanted to play a character like that. It’s been fun, I’m enjoying it, I feel like I’m finally creating a character now which is great fun for me. I’ve been back a year now and it’s effectively a brand new character and production team.

“It feels like a brand new job, and the first few months were just finding my feet. It’s been a pleasure for me as the people I’m working with are really well established, big characters in the show, so it’s good fun and really satisfying.”

“Work wise I’m settling in and I need to figure out long term where it’s going to go. With this job you don’t want to get too comfortable and plot the next ten years because a new producer could come in and not like you.”