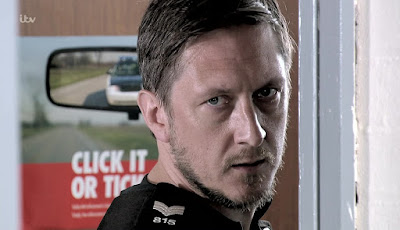 Intimidation Award: I hope the other officers saw that look Neil gave Craig before seeing the Inspector. That was pure intimidation.

How Soon They Forget award: Who was teaching who how to pull pints? Toyah and Peter have both worked in the Rovers before.

Musical Ambiance: "Our House" playing in the pub on the McDonalds' last day/Barlow-Battersby's first day.

Fashionista award: Liz even brought out her black spiky necklace for the goodbye party. We haven't seen that in ages! and as a trendsetter, Liz has jumped into the boat of people wearing black rimmed specs. 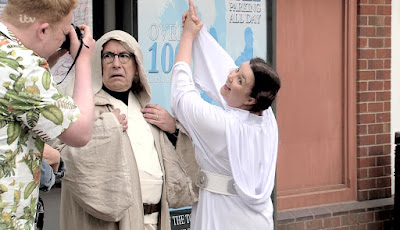 Not the Romance Of the Century: Mary asked Norris to marry her so they could be legitimate Mr. and Mrs. for the competition. The man, he say Yes!

Bible award: Her name might be Leanne, not Mary, but she and her baby were offered a room at the Inn. Rovers Return Inn, of course!

Continuity Fail (again): Sally threatened Gina with having to pay her rent. But I'm sure Sally used her connections to get Gina a nicer council flat. Why isn't she living in it? What did I miss? 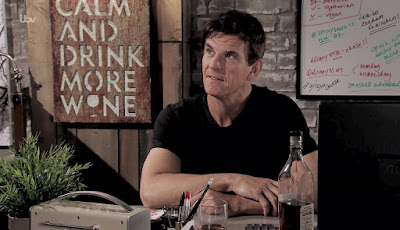 Lines of the week:
Liz "At least drunk people are happy"
Sean "We've been bitching about you all night" Eva "Babes, don't worry about it" Sean "Good, cause we'll probably be bitching about you all tomorrow"
Beth "an alcoholic running a pub..." Roy "It worked out for Sam Malone" (of Cheers fame) Beth "Is that the fella with the eye patch that runs the Flying Horse?"
Mary "I've got myself into a dilly of a pickle" (oh, good one!) Mary "Mother used to say every time you lie, an angel's wings catch fire" (said with perfect delivery!) Sinead to Gemma "I've only got an hour for dinner and your mouth is taking up most of it" Gina about Sally "You should have seen her in the olden days before she became Lady Muck. She could turn her hand to anything... and did!" Mary "I have worn this exact outfit on the bus many times and let me tell you. It's a lot less trouble than the Chewbacca get-up" (hahahahaha! I did NOT expect that) Audrey to Gail "You're like some harbinger of Doom, you are"
Moira "Friendship is no substitute for a tight ship"
Michelle "Stop whining and grow a pair. You're even more high maintenance than Steve" (this coming from the High Maintenance Queen)
Drew's father "I denied my son in life. I will no deny him in death" (about flamin' time!)
Rosie "The thing that you use when you want to put things in and put them in the post" Gina "An envelope" Rosie "It's so weird how some words just won't stick with me no matter how many times I hear them, they just seem to slip away"