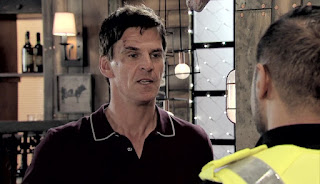 We all know that Michelle went running to Robert on the rebound from Steve. I wonder if that decision isn't starting to look a bit shaky for her.

At first, I wondered about the introduction of drug dealer Rich to the canvas. After the whole accidental stabbing incident with Chesney, I thought it was just an elaborate ruse to get Chesney and Sinead firmly back together. Daniel saved Chesney life but Sinead thought he'd been the attacker, further pushing Daniel away from her. But, no. That doesn't seem to be the reason Rich is lurking about on our screens.

It seems to be bringing up Robert's murky past. By 'eck, he's squeezed a lot into the nearly 13 years between Tracy walking out on him at the end of 2002 and him reappearing for Deirdre's funeral in  2015, hasn't he? He's changed his career from carpet fitter to fully qualified chef, been married again (and divorced soon after he returned to Weatherfield, at least I assume so), owned a restaurant before he returned as well as developing and kicking a drug habit that also involved yet a different girlfriend than the one he married. A drug habit that has also made an enemy of his former dealer, rich.

Rich rocked up in the Bistro, not knowing it was Robert's restaurant and it wasn't the happy reunion you might expect. Robert seemed quite unsettled. Then there was the incident with Daniel's overdose and later, Chesney's stabbing. Robert managed to set Rich up and he got arrested but has threatened Robert. 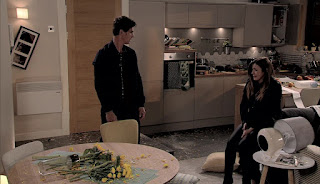 Now those threats seem to be a reality. In 24 hours, the Bistro has had graffiti sprayed on the inside wall, a Molotov Cocktail thrown on the movable sign outside the Bistro, Robert has been mugged and the flat was broken into. All warnings, all threats, nothing that can proved Rich had any hand in it. Michelle is frightened and she's right to be. There will be further incidents, if the spoilers hold true.

And you know what? I don't care. There, I said it. I am absolutely not invested in this storyline one bit. I find it tedious and over-sensationalized. Why is that, I wondered to myself. Myself answered, because you have no interest in Michelle or Robert, that's why. Oh sure, I had a lot of sympathy for Michelle when she lost her baby and found out Steve had a child with Leanne. But I lost it again when she started being bitchy to Leanne, even as recent as this week when she tore up the registered letter. I do know where she's coming from and I do realize that resentment and hurt doesn't go away quickly. Her reactions are perfectly within the realms of reality. Look at what Eva's doing to love rat Aidan!

But with Michelle, I just want to tell her to suck it up and move on with your life. Which is not really fair because what she went through was a much higher level of betrayal than what Eva discovered about Aidan. The difference is that I like Eva and I don't like Michelle. It's not reasonable but it is what it is.

I don't like Robert much, either. He's got a nasty edge to him these days with a temper that has probably got him into a lot of trouble in the past and isn't about to stop. He apparently likes to gamble and that could end up being a major problem. This isn't the first time he's gone off to the casino in a strop. The last time he did, he ended up drunk and in a hotel room with Carla!  Some might say Robert is just passionate. I say that Robert has a dark side to him and I wouldn't want to get on it. Michelle is starting to see that, too. He does keep leaving her alone where she ends up facing all this trauma by herself with no support from him, the man who keeps saying he'll look after her. That's going to erode that relationship fast. I don't think they'll make it to the end of the year at this rate.

Wherever this storyline is going, whatever Rich thinks up to terrorize Robert and Michelle with next (and it does seem like Rich is behind it unless Zeedan's gone completely psychotic after Robert shouted at him one too many times over the spice rack), I have no interest and will take the opportunity to make another cuppa while those scenes are on.