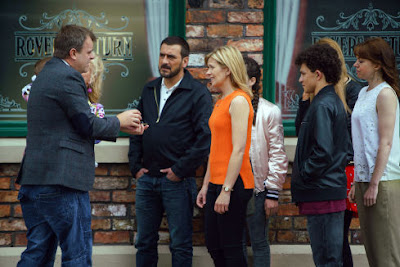 
This week in Coronation Street we saw Steve propose to Leanne (again) and as you can see from the preview picture above, he did it in front of a whole load of their family members.

You can read more on the proposal here.

Jane Danson, who plays Leanne Battersby, is interviewed this week about the second proposal from Steve and how Leanne might reply!

Steve has already asked Leanne to marry her, but didn’t give her answer while drunk?
Yes, she was definitely quite drunk. It has been a while since Leanne kicked back and relaxed and she might have gone a bit too far!

How does she feel about the first proposal in the cold light of day?
Let’s just say she isn’t jumping for joy, she is mortified when she wakes up the next day and realises what she said.

As Leanne goes to talk to Steve he surprises her with a second proposal – what happens?
He dresses Oliver in a babygro with the words ‘will you marry my daddy?’ written on them. It’s in in the middle of the street so she is really out on the spot.

How does she feel about him using Oliver to propose?
It’s a little bit of emotional blackmail as he knows she want a proper family for Oliver, so he has used the one thing that might strike a chord with her.

Does she feel under pressure to give him an answer as it’s so public?
She is horrified to find herself in this situation, in the middle of the street with everyone watching. The pressure is really on her, the father of her child is proposing - can she really dump him in front of everyone?!

Has Leanne ever considered a romance with Steve?
No. They had their drunken one-night stand that resulted in Oliver, but other than that they have just been great friends going back years. You would have thought if something romantic was going to happen between them it would have done by now.

How did you react when you were told the characters may be getting married?
Simon Gregson, who plays Steve, and I were both a bit baffled as it came out of the blue, but once we started working together and the storyline became clear we both realised how much fun it could be. Plus we we could see how Steve could find himself in this situation and manage to drag her into it with him.

Do you think they would make a good couple?
Possibly. When they sit down and discuss it they both feel that on paper it could work - but is there a spark there, and can you have a relationship without that spark?

What’s it been like for you working more closely with Simon Gregson?
It has been absolutely hilarious. He only has to look at me and I get the giggles. It is nice to be doing some lighter stuff for a change bearing in mind what she has gone through. Simon and I have know each other for years so it is very easy to work together.

Would you advise Leanne to make a go of things with Steve?
I certainly would! Even though she thinks she is doing it all for the right reasons, it can only end in tears surely! I think Leanne she needs to learn to stand on her own two feet for a bit and not rely on a man. She is a Battersby, and they know how to look after themselves.

I thought this scene in the street was hilarious! This could be quite a good pairing if the writers can keep it funny. I'm looking toward to more laughs on the street!!