Who's the real target, Robert or Michelle? 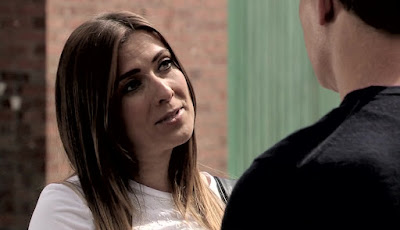 Michelle has been throwing Phrases of Doom all over the place over the last few episodes, thinking everything is going to be ok, all the troubles are over now. It makes me shudder when I hear all that. It only means the worst is yet to come.

Macho man roughs up the apparent culprit behind all the aggro but Rich insists he's not to blame. What if he isn't? Who else has it in for Robert, who else might be mounting a campaign to scare Robert into submission over some imagined slight? The only other one I could think of might be Adam, trying to scare Robert into a bigger settlement for Chesney but that seems a bit extreme, even for Adam.

What if Robert isn't the target at all? What if Michelle is the target? The graffiti was generic enough, "R.I.P.", the fire "bomb" only damaged the sign outside the restaurant where she worked and wasn't tossed through a window or the door. The flat was overturned but nothing was taken and the back window of her car was smashed while she wasn't in it. The car, by the way, that nobody knew she owned. I suppose that was bought with her divorce settlement. Apparently she's going to be kidnapped or suspected to be.

If she's the true target, who would it be? My money's on Will. Does anyone else find it odd that he's reappeared just before all this started? He would certainly be holding a grudge. He told Maria he regretted his silly crush on a married woman but many a man who starts off seeming reasonable has turned out to be off his rocker.

What say you, kind folk? Could Michelle be the real target? If so, who and why?