Revenge comes at a Price

(This post was originally posted by Emma Hynes on the Coronation Street Blog in July 2017, reposted to this blog with permission.) 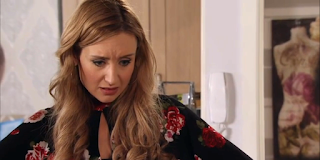 Ah, sweet revenge. A dish best served cold, and an apparent staple on the menus of the various cobble-lined eateries of Coronation Street. Campaigns of vengeance have included ‘Mad’ Maya unleashing all manner of torments on Dev, culminating in an explosion; Tracy having Charlie Stubbs for dinner and Crème brûlée à-la Carla for dessert; and David attempting to turn the courtroom to cinders at the trial of Clayton Hibbs. Most of these held elements of the spectacular; a gas leak, car full of petrol, and blazing apartments. The perpetrators are known for their dark sides, and even though, for example, conman extraordinaire, Lewis Archer, exacted a more subtle revenge on Gail via a public screening of a sublime video tape, he was still a slippery character with a shady past.

Now, fast forward to the present day where Eva Price is in full vengeance mode, having discovered her partner Aidan has been having an affair with close friend Maria. There is no way this fabulous modern-day Corrie icon could be accused of having a truly sinister side, and there isn't an explosion in sight, which for me makes this current tale of retribution all the darker.

Aidan’s infidelity leaves her with strong grounds for hurt, upset and anger, and up to very recently, I was firmly on her side as I too desired his comeuppance. The scenes during which she discovered he was unfaithful were tear-inducing, and Cath Tyldesley is doing a customarily brilliant job. But the action has taken a decidedly questionable turn.

Pretending to be having Aidan's child as she attempts to bankrupt him and destroy his business, Eva is displaying behaviour which, I feel, does her character a disservice. Our editor Glenda has shared her thoughts on the fake pregnancy element of the storyline, and I wholeheartedly agree with her sentiments. 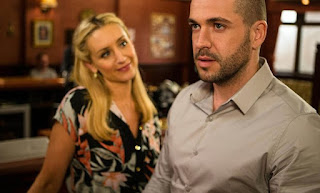 In addition to this major deception, attempting to bleed Aidan dry and take the factory in cahoots with Adam, and all now in the knowledge that Johnny is ill, has me seriously doubting her moral compass; even to the point where I actually feel sorry for Aidan. He’s stepping up in the belief that he’s to be a father, and planning to buy a flat, which she’s trying to convince him should be in her name. He's also risked the wrath of the current Underworld office dwellers by giving her a job there.

Sadly, there is something undignified in Eva’s actions which I feel is beneath this character who I’m very fond of. Yes, we always knew she had bunny boiler tendencies, but this all seems a bridge too far. And while she might show glimmers of doubt and regret, they’re negated by the fact that she carries on with her deception, each step of which is worse than the last. It's also interesting that Aidan appears to be bearing the full brunt, while Maria, it seems, is safe glaring from screen left.

Explosive acts of revenge borne out of passion are one thing, but sustained and callous efforts to destroy others by subtle, calculated means are, for me, a dark prospect, and I think our Eva is better than that. While we can't know how this will all unravel, I think the worst thing would be to see her plans come to fruition and find her loving every minute of it. No thank you. I'd rather she learned a valuable lesson which garners sympathy, and has us loving her even more as she picks up the pieces.