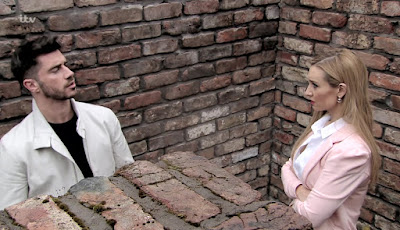 I'd say August was an interesting month in Corrie. Bethany's story reached a milestone when she overcame Neil's intimidation thanks to Craig's faith in her and his detective work, goading and then recording Neil's confession. It was enough for Bethany to finally make a full statement to the police who then got enough evidence to charge Neil and Nathan. That was probably the best storyline of the month.

In the worst one, Robert's former mate, Rich the drug dealer and now sniffing around and allegedly terrorizing him and Michelle. I thought making Robert into a former drug addict was a bit hard to take and thought Rich's introduction and Chesney's stabbing injury was only there to ensure Ches and Sinead got back together but there seems to be more to it than that because there's no prizes for guessing who's now at the center of that storyline. I am absolutely not invested in this one, folks. Let's move on.

The comedy of Mary and and Norris with a great number of excellent lines from Mary has been the brighter side of the show this month. The oafish Brian is probably supposed to be funny but he's not.

The Rovers Return Inn has changed hands for the first time in a decade and it's been quite an adjustment for Liz and Steve, much less we viewers.

There's more to tell and more to read over at State of the Street including thoughts on the Eva/Aidan/Maria triangle and the other almost-triangle of Kevin/Anna/Erica.