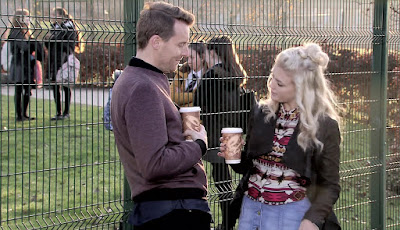 Flamin' temper award: Chesney doesn't lose his temper much but he's a ginger and he's got a temper and knows how to use it. With some justification this time, mind you.

Sinead 1, Adam 0: She's right. He can't be too smart if he resorted to cheating on an exam.

Romantic Fail: Luke planning a romantic getaway to Bristol in hopes of tracking Andy down went over about as well as you might expect.

Priorities award: Rosie doesn't want to go to prison because of the food. Not a drop of coconut oil in sight!

Musical Ambiance: Roxy Music's More than This when Mary was talking to that guy about first impressions vs getting to know people slowly.

Continuity Fail: Ken is not Adam's dad. I think Todd would have known that, wouldn't he? (see line of the week below) Lines of the week:
Brian "Gardening not your bag?" Rosie "Not unless it's Prada"
Chesney "It's not what she's been doing, it's who she's been doing"
Daniel "Everything scares you, Chesney. Fear and Weakness define your entire existence. That's why you'll always come second best"
Ken about a semi naked Sinead "Some essay!"
Sean "It's pneumonia, it starts with a P" Kirk "Is that how you know you've got it?" (HA! Totally didn't see that one coming!)
Luke on the trip to Bristol "I wanted to kill two birds with one stone" (such a romantic. not.)
Mary "He is what my mother used to call a wazzock!" (hilarious scene, that!)
Rosie on Adam "He's just what I need after that double crossing cheat in Miami" (yep, a double crossing cheat in Weatherfield. Just the thing.)
Billy about Adam "What's he doing here?" Todd "Looking for his dad" (then he should go to the local cemetery. Mike Baldwin's dead. Presuming Todd meant Ken, then Ken is his GrandDAD. Continuity FAIL!)
Sinead about Daniel "You'd think he never had a mother!" (open mouth, insert foot. Has he not told her?)
Ken "It makes me feel like quite a snob. Am I?" (Surely you'd have figured it out by now. Yes. Yes, you are)
Sarah "In this house, you're considered flash if you have cereal in a bowl!"
Phelan "I've been accused of a lot of things but playing Cupid is not one of them"
Todd "You're selling cocaine. It's hardly Dragon's Den!"