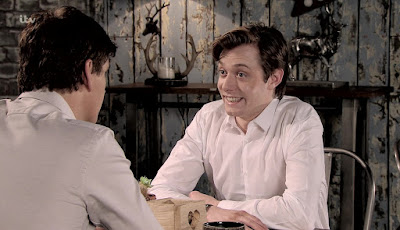 I'd hire him award: Look at that face. How could you resist?!

Aggressive award: Forget the romance of red wine, Robert's going for "down and dirty" with tequila. 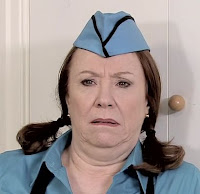 Blast from the Past: Betty was given a name check by Liz showing the potential buyers around.

Voice of Reason award: Peter made some very valid points in his conversation with Leanne in defense of Steve. Daniel making pro and con lists regarding having a baby.

Liz brought out her pink furry cowboy hat! I remember seeing her wear it when she returned from Spain one time even if it was for Amy as she says.

Style award: Rosie carring the washing bucket like it was Prada.

Lines of the week:
Nick "How many legs does Steve have to stand on"
Ken "I just don't like the thought of him making a show of himself in public" Rita "Oh... I wonder who he gets it off?" (cue Ken looking sheepish)
Peter "I am alot of things but I'm not dishonest" (Yeah, right. to be fair, even he saw the irony in that one)
Robert "You're a human being. There's no learning curve. I went out with Tracy Barlow, twice!"
Bethany "Is it possible to die of embarassment because if it is, I'm not long for this world!" (said every teenager ever!)
Sophie "Why do you have to wear something horrible to be taken seriously?" (indeed)
Rosie about John Lennon's peace bed-in "What was he complaining about?" Erica "World peace" Rosie "Did it work?"
Gemma "God loves a kebab!"
Peter "You can't expect to bang a gong and turn Adam into something respectable"
Sally "It's a slippery slope! It's the thin end of a wedgie!" (something like that)