Where could Adam's future office be located? 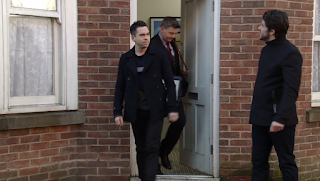 (This post was originally posted by Chewy on the Coronation Street Blog in February 2017, reposted to this blog with permission.)

In last night's episodes, we saw Corrie's own version of Saul Goodman, Adam Barlow, checking out an empty house on Victoria Street as a potential site for his future empire.

The house in question, despite existing since Victoria Street was first added in 1999 has never actually been used in the show, the houses themselves are next to the community centre on Victoria Street.

The other potential location for his office was Kevin's old (or new?) garage on Viaduct Street, which, before being a garage was only seen in the background as Kieran Wynne Haulage. There is also potential that his offices will eventually be located in a new part of the set.