Reality award: I do like it when we see a character like Liz who is normally made up, dressed up and hair done looking like most of us in the morning. A bit of makeup, yes, but hair in curlers and wearing comfy clothes.

BombMichelle Award: She lays a bombshell on Steve about another baby but her life ended up looking like the after effects of a very large bomb when she found out the truth.

Get your finger out award: David keeps going on about Max not being a Platt. He's been meaning to adopt that lad for years. What's he waiting for?

Hypocrite award: Ken Barlow who had a few punch ups over women himself over the years, usually with Mike Baldwin. He was standing on July ice when he was giving Daniel a hard time over the fight with Chesney. And the locked in punters for staying put while Michelle slags off Steve, insults Eva and drags her out by the hair when she stands her ground against Michelle. All for the want of a few free drinks, condoning increasingly bad behaviour. 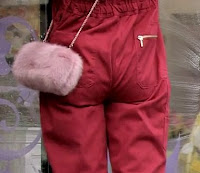 Foot in Mouth award: Rita, gossiping about Steve fathering a baby with another woman, to Kevin. Ooops.

Fashion award: Rosie might be in overalls, but she still accessorizes!

Sitting on the Fence award: Tim (see his line of the week below)

Musical Ambiance: Michelle playing Respect on the juke during the lockout.

Blast from the Past: Seeing Gail behind the cafe counter!

Method acting award: Ken Barlow. If it isn't "deer caught in the headlights", it's "utter confusion masked as disappointment", his other "go to" reaction/expression.

Lines of the week:
Eva "I'm going to prison. I don't want to look too glam" (you couldn't look not glam, babes!)
Yasmeen "You could start a fire with a spark that big"
Jenny "I thought we could take a few seconds to run a new project by you. I call it Blackmail" (Go, Jenny!)
Gail "Can't put this genii back in the bottle"
Michelle to Steve "I always knew you were an idiot, but you were my idiot"
Steve "We can survive this" Michelle "No. You killed us"
Gemma about a naked kebab "it seems a shame to have salad on your birthday."
Gail "I might not be able to stop my children getting into trouble but I can make sure they eat properly"
Mary "I was the only person strong enough to lift the carthorse's leg" (HA!)
Anna "Sally, I don't take pleasure in your family's problems. Just yours!"
Tim "I want a pint with me mate, and I want to support me mate's wife when he's being an idiot"
Sally on Rosie's Instagram content "I wish I could say I was more familiar with your face than your bosum"
Tracy to Steve "You normally keep the worst of your stupidity behind closed doors"
Daniel to Ken "We can't all go running away every time the going gets a bit tough" (ouch)