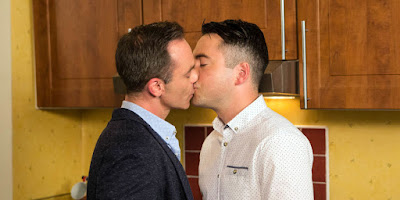 (This post was originally posted by Sophie Williams on the Coronation Street Blog in February 2017, reposted to this blog with permission.)

One particular pairing on the cobbles has shown just how brilliant the writers of Coronation Street can be. Last summer, Todd Grimshaw and Billy the Vicar embarked on a brand new relationship. Whilst this pairing may seem odd to some, for many it’s genius. The two characters are at completely opposite ends of the spectrum.

Ever since his 2013 return, Todd has been seen to be manipulative, a liar, and an all-round troublemaker. Then you have Billy, the local vicar who has a heart of gold and will do all he can to help those around him. However, what’s more intriguing is the way these two have been developed, the audience can see different sides to these characters; they’re both very layered and three-dimensional. 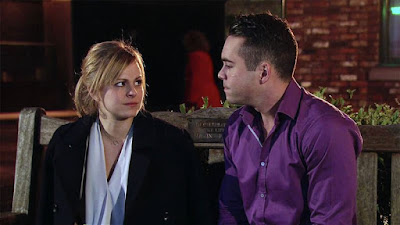 In the last year, the audience has seen a side to Todd that would have been more familiar before his trip to that London, a side to him that deep down is caring and considerate. A highlight of this was shown during Sarah’s pregnancy with Harry. Todd was incredibly supportive and viewers were reminded of the tragic loss of their own son back in 2004. 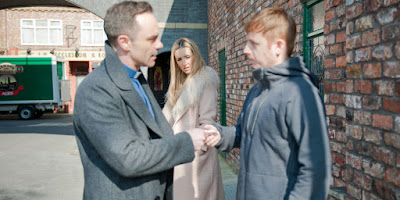 Similarly, Billy has also had the chance to grow as a character, especially when his troublesome brother, Lee, showed up. Here, we saw a side of Billy that we weren’t used to. This was a character who became constantly on edge and eventually got involved in a pub brawl between Aiden, Jason, Johnny and Phelan. It was during this time that a supportive Todd and a distressed Billy were thrown into the mix together more, producing a blossoming friendship that ran a lot deeper.

Compared to other storylines in the show recently, I was incredibly impressed by the way the writers handled Todd and Billy’s romance. It was developed step by step with no elements of rushing. At the beginning of 2016, Billy was seemingly becoming one of the few people Todd genuinely trusted. Covering up Callum’s murder and the problems with Lee undoubtedly pushed them together, and issues began to arise when Billy ended his relationship with Sean because of the growing feelings he had for Todd.

This came as a shock to me because I didn’t read spoilers at that time and the way Daniel Brocklebank performed the build up to this was perfect. After this scene that ended with Todd throwing Billy out of number 11 viewers began to see a jealous spark appear within Todd when Sean and Billy got back together. Rather than Todd being seen as someone who was just out to cause misery, it was tremendously clear that Todd had in actual fact real feelings for Billy; something we haven’t seen Todd tackle since 2004. During the summer after Billy had originally confessed how he feels, the tension and chemistry between the two characters grew and grew until it reached breaking point when Todd finally let down his guard and told Billy how he really feels. That entire scene was superb; Todd appeared vulnerable which is not a common trait for him. He acknowledged how people perceive him due to his past actions but the overall delivering line of, “It’s not going away, and I don’t want it to”, really showed the extent of how much Todd had fallen for Billy. Of course, it didn’t take long after this for Billy to end things once and for all with Sean before sharing a passionate kiss with Todd in his kitchen.

One of the main reasons Todd and Billy work so well is no doubt down to the pure talent of Bruno Langley (Todd) and Daniel Brocklebank (Billy). Their high amount of chemistry is rare to see on a Soap and it was even there long before their relationship got underway. For me, it’s refreshing to see Coronation Street cast Bruno again for the role of Todd following his return in 2013. He came back better than ever and certainly brings the character of Todd to life, showing us that he is capable of extremely dark doings but he is also human with feelings and a sensitive side.

Daniel took up the role of Billy in 2014 and has been doing a fantastic job with him. Bringing energy and fun to the street, he is a valuable addition to the cast and I hope he sticks around for years to come.