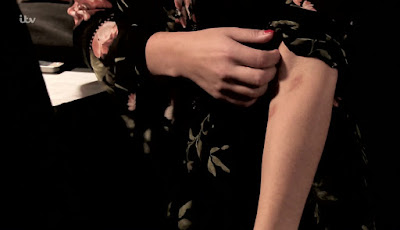 Heroin Chic award: Is Mel on drugs? Is that how Nathan is keeping her in line and able to get her to help manipulate Bethany?

A Rock and a Very Hard Place Indeed: Michelle wants to go see the new baby, Steve wants to keep his missus happy but it's his baby! He keeps saying it's Nick and Leanne's but it's cutting him up inside. Liz knows it, too.

Soap Cliche award: When was the last time anyone has given birth in a hospital?

Redundant award: Nick and Leanne's last wedding, or the attempted one, was at Christmas a few years ago. I suppose they could reuse the invitations and just change the year.

Musical Ambiance: Dire Straits' "Romeo and Juliet" with Steve and Michelle in the back room after returning from the beach, supporting each other through a tough day. Also while Brian and Cathy were sharing a drink and talking about Roy.

Confession is Good for the Soul: Awww poor lickle Liam called the police to confess to killing Darryl!

Lines of the week:
Toyah about Adam "He'll never find anyone to love him quite as much as he loves himself" (she's right)
Steve "Whatever happens, or *has happened*, you're the love of me life" (pre-emptive strike, anyone?)
Leanne "Help!" Toyah "What are you doing?" Leanne "I'm singing Beatles' tunes, what do you think I'm doing?"
Brian "Roy makes it perfectly clear he thinks I'm a freeloader, someone that takes without giving" (as he helps himself to a big handful of Tim's pork scratchings without asking)
Zeedan "D'you have cards that say Sorry I Opened My Big Mouth?" Rita "I'd be a millionaire if I did, love"
Toyah about the baby "Isn't he tiny?" (no, not really!)
Beth about her mother "She reckons another week and she'll be fit enough to go shoplifting again"