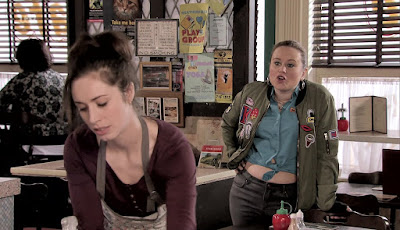 Shona has me very intrigued.

There's a connection to Kylie and Gemma through the "old days". It's been suggested that she's related to Clayton or Callum, but she seems to be genuinely mourning Kylie. If she was that close a friend or relative, surely Gemma would remember once she realized where she knew Shona from. Gemma was a good friend of Kylie's and if Shona was as well, surely Gemma would know.

And why was Shona on the streets? I don't know how old Shona is supposed to be, she doesn't look old enough to be Kylie and Becky's mother who, even if she was pregnant in her teens with Becky, she'd still have to be close to 50 now and if she was their mother, and we've been told she was an addict, she'd definitely look her age after a rough life. So that can't be it. Perhaps a cousin or another half sister? Maybe Kylie and Becky's mother or father had a younger sister and she's Auntie Shona? That would make her a great-aunt to Lily and would explain the emotion over Lily's thank you card and her tearful visit to Kylie's grave. 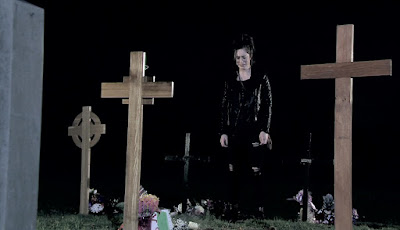 She doesn't seem to harbour a grievance. We haven't seen her shoot angry daggers at David behind his back for being married to the woman Clayton killed causing him to go to jail (and who killed Callum though nobody knows about that outside of the Platts). It doesn't look like she's there to take revenge. I wonder if she knew who David was when she chatted him up in the club the night she nicked his wallet? She certainly realized who he was after due to Kylie's photo in the wallet. She avoided Coronation Street at first, knowing David lived and worked there and she knew there was a kebab shop which was where Clayton killed Kylie. Even now that she's living at Eileen's and working in the cafe, she does seem uncomfortable whenever David is around and it doesn't seem to be out of anger.

I'm dead curious as to where this is going, however, I'd hate for it to run the cliche route of having she and David get together romantically. Soaps being soaps, I'm afraid that's what will happen but I may yet be surprised. I'm not holding my breath but I do want to get to the bottom of it.

Here's something that just occurred to me...Kylie was away from the Dog and Gun for some years, possibly for a few years before she met David, we don't really know. Maybe Shona and Kylie had a romantic relationship for awhile. While we were not aware that Kylie was bi-sexual, it's always possible she reached out to a woman if they were both trying to survive the Mean Streets of Weatherfield and it grew into something more. I think that would be an interesting twist. What say you? What's the connection between Shona and Kylie? Where do you see this storyline going?

OMG WHO CARES!! really she is boring me to tears, please end her storyline quickly and get rid
Karen