1996: A Corrie Christmas to forget

(This post was originally posted by Clinkers (David) on the Coronation Street Blog in December 2016.)


Given the number of episodes we currently have to juggle in a week, there isn't often much time left for settling down with a slice of Corrie Gold - an episode from yesteryear. With the proliferation of boxsets available, when time permits, I usually haul a DVD from the 1970s or 80s out of the box. However, it struck me the other day that I've given the 1990s, in particular the late nineties, a wide berth? Why? I was around at the time and watched Corrie as vigorously as I do now, yet my memory of the show at that time seems a little vague. To remedy this, I decided to re-watch an episode from twenty years ago. 1996 - the year of Three Lions, Gina G and the emergence of the Spice Girls. All etched on my memory. Of Weatherfield though, nothing. Nada. Nowt. 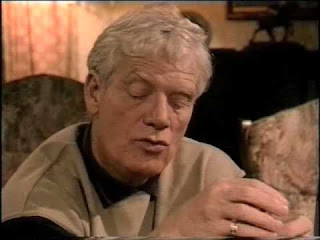 Back then to December 1996 and what appears to have been a grim old Christmas on t'cobbles. It's the aftermath of a Don Brennan suicide attempt.  I always think of DON in capital letters, his name being spat out by hatchet-faced Ivy. We encounter DON in the sea of beige that was number 5, stewing in maudlin malevolence. Martin arrives, dressed in a dreadful turquoise coat (which remains with him for the rest of the episode) to give DON a pep talk. It fails. Enter Ashley, minus his trademark squeaky voice (when did that arrive?) and Fred Elliott bellowing and blathering. A more unprepossessing quartet of characters you couldn't wish to meet.

Cut to the Rovers where Liz is rooted to the spot and sporting a Halloween fright wig. She's chatting to loopy old Anne Malone, another character thankfully forgotten. There's some chit-chat about Steve having gone missing but no one seems bothered, least of all Vera, Maxine and Tracy Brabin MP, or Tricia as she was back then. Neither is anyone all that fussed about Curly's impending departure. Vera comes out with some nonsense about having to go to church in order to put Curly off the scent - there's going to be a farewell party. It has to be said, the atmosphere in the pub is very muted and the set seems to have been lit with a 20 watt bulb. Plus it's very beige indeed.

Next we're at Curly's house where he's erected a tent in his living room which dreary old Anne Malone is creeping into. She wants a slice of Watts but Curly's not tempted. "Let's have it in here" she suggests and we can only surmise that she's referring to Curly's offer of a Mellow Birds. Otherwise we're all hurling into any available Santa sacks. 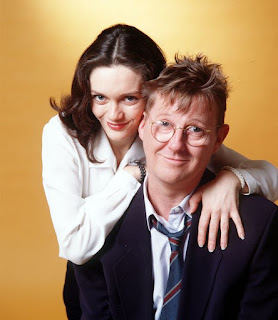 Over at the Platt household, the original versions of Sarah and David are present, together with Gail and quite possibly the nastiest piece of knitwear known to man. Imagine someone attempting to create a garment on a knitting machine, hating the end product and then hurling it at a passing Gail. The Platt house looks a bit odd too as there seemed to be an extra bit of wall and kitchen was possibly a different shape. There again, the kids changed overnight without question so Gail's hardly likely to start banging on about the brickwork.

Ooh look, it's part two and horror of horror, it isn't Anne's fine ankles that come backing out of the Curly tent but those of Emily. I know he's off on his travels but surely . . . Anyway, we get a chance to see another horribly beige living room. No wonder he's so downbeat. The rest of the nation was slapping Dulux "Pastiche" on its walls whereas Weatherfield seemed to get inspiration from a moist digestive biscuit. 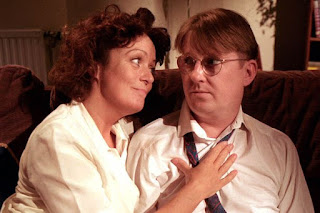 We return to the Rovers where Liz is still thrilling the crowds with her Ronald McDonald weave. Jim's propping up the bar, so he is, with a face like an eight day clock. What the hell is wrong with these people? In the dim light of the Rovers, we can just about see Curly making an entrance and engaging in some desperate looks with Maureen from t'shop. You see, it would appear that Curly had given Mo something special for Christmas, unbeknownst to Bill 'tache' Webster. All roads led to Mr Watts back in 1996.

Maxine Heavey appears with a straw, slurping the remains of other people's drinks. How much was Fiona paying her at the salon? Eight pence an hour and as much hair as she could eat? Maxine wasn't likely to wake up with a hangover the next day but give it a few years and she would be on the receiving end of the mother of all headaches.

Is that Norris over there? Yes it is, still looking old but less camp and not quite so vindictive. A case of old Nozzer not having once been nice but simply less awful. He's lumbered with Fred who, apropos of nothing whatsoever, is bouncing up and down on the spot.

By now, we're desperate to get shut of Curly so Jack calls for 'a spot of hush' in the eerily quite pub. It's like something from Acorn Antiques. Resembling a  Greek chorus, Alma, Mike and Des appear from nowhere. Again, soon all three would be exiting stage left. Curly takes a bunch of pictures with his new camera, although given the paucity of light in the Rovers, he'll need a flash bulb the size of Jodrell Bank to make any impact. There's some old nonsense with Tracy Brabin MP having a row with Mike Baldwin who has fired her from t'faktry. Not sure which one though.

Maureen seemingly leaves the pub with a different hairdo to the one she arrived with. Either Audrey's doing perms in the lav or the lighting is so bad that we've mistaken a beehive for a brush cut. Outside on the Street, Fred is still attempting to trampoline on concrete whilst Norris is trying to drag him away. The record shows that neither character appeared on the show until the following April so presumably they were both sedated and jammed in the Corrie cupboard for the duration.

The end is nigh and Curly calls a cab on his mobile phone, complete with aerial, to take him to pastures new. Or pastures anywhere by this stage. A shame he didn't call DON who might have driven him into the canal. Maxine is also shuffling along the pavement three paces behind confused Curly, eventually asking him "Will you be nice to me?" She may has well have been doing a fan dance, although on the slave wage being doled out by thrifty Fiona, Maxine would have been lucky to  stretch to chicken feathers. Anyway, a rampant Curly having already gone three rounds with Maureen, embarked in a Carry on Camping romp with frosty Anne and Emily, now decides to enjoy himself to the Max.

We are so used to the cut and thrust of the Corrie of 2016 that the ambling episodes of 1996 seem quite foreign. This one in particular seems quite poor and no doubt contributed to the revamp of 1997. While we don't need every episode to be thirty minutes of edge-of-the-seat action, this episode courtesy of the Ghost of Christmas past, reminds us that taking it at a snail's pace can also be very, very wrong.

This was absolutely hilarious. What a great synopsis of an episode I can almost remember - I certainly remember the characters of the day. Times have definitely changed.