(This post was originally posted by David (Clinkers) on the Coronation Street Blog in November 2016, reposted with permission.)

No don't worry - this isn't some two thousand word homage to Les Dennis (aka Dead Michael) and his years as host of ITV's plodding quiz show. Although, let's face it, he was arguably more at home in the role than his predecessor Max Bygraves but that's not our concern. 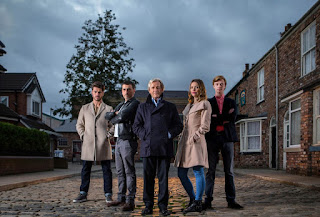 Happy is the family that reunites in the hallowed wards of Weathy General. It took a major stroke for the disparate elements of Ken Barlow's family to come together. There they gathered, the alcoholic, the murderess, an oily businessman and a college scarf on legs. What's not to like? The Barlows are together in a way that they haven't been for many years and interesting to see the pendulum swing away from matriarchal element of the family.

When it comes to family though, Corrie sometimes conveniently forgets those that went before. Or even goes as far as not bothering to even come up with a story. Who exactly then, is missing in action?

Step forward, well she would if she still existed, Debbie Webster, Kevin's long and definitely lost sister. Last seen in 1985, Debbie would now be around the fifty mark. Did she marry? Did she have kids? Has she still got her hair dragged into a ratty pony-tail? Poor old Debbie goes unmentioned and unloved by Kev who, it has to be said, has managed to erase his brother Carl from his timeline too. Remember Carl? No reason why you should. He was the product of Bill's marriage to useless hairdresser Elaine Webster and grew up in Germany. Carl would be thirty years old now. What's he like? Could he do a 'Peter Barlow' and return without so much as German accent? 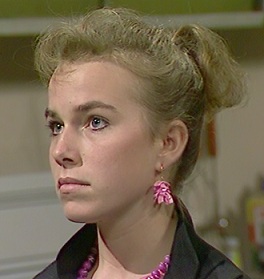 Kev managed to forget his sister and Sally did the same with hers. The very unlovely Gina tottered around the Street with her hoop ear-rings for a short period in the late 1980s and then was suddenly no more. There have been a few brief mentions but what we want to know is, has she remained chavtastic? Comedy gold could ensue if Sally was suddenly confronted by her sister from the wrong side of the tracks. Let's imagine Gina as a throbbing mass of middle-aged sexuality in leggings, maybe with a couple of nice tattoos. Then again she might be a biology teacher from Macclesfield.

Missing relatives is one thing but other Street residents seem to never have had any. Liz McDonald arrived in Weatherfield with no past whatsoever. There were odd mutterings about her mother Nancy who, despite living nearby in Southport, couldn't rustle up enough interest to visit her daughter. Is Nancy still alive? Did she go into hiding to avoid her daughter's accent? Did she pass on her clothes to Liz? We assume that Liz was an only child. Understandable. Look around the cobbles and there are non-families everywhere. Remember Dev's mother? If memory serves me right, she was played by Souad Faress (Usha from 'The Archers') and looked about six months older than her son. No mention of her for years. Likewise Dev never speaks of his own daughter Amber or his even older child, the name of whom he has no doubt forgotten. Didn't he have grandchildren too or am I just inventing things? Great-grandchildren?

The real Corrie enigma though is Rita. Dear old Rio Rita. In over forty years, the poor woman has only managed to notch up one - yes one, relative. Admittedly she's about 150 years old so her parents must be long gone. Her Uncle Sam rolled up on her wedding day but he didn't look much older than Reet. We surmise that she has no siblings, cousins or indeed anyone in this world. No wonder she's spent decades hurling her cheque book at surrogate kids. For pity's sake, let's see her on't th'interweb, attempting to track down another Littlewood. They must be out there somewhere.

A moment of quiet contemplation then for those never seen or those not seen for eons. For Mary's monster of a mother, Erica's ... err, monster of a mother. Fiz's older brother Billy, Sean's mum, Andy McDonald forever languishing in a Spanish bar, Audrey's forgotten son Stephen, Gail's forgotten dad whats-his-name, for all of Beth's family (bring back gran), Steph and Luke's parents (do they ever visit?), Tracy's former in-laws, beige Andy's ma and pa . . . and on it goes. While we don't need all of those mentioned to suddenly pile up on a forty-seater coach yelling 'Surprise!', it might be nice to delve into the forgotten families of Weatherfield now and then.

Email ThisBlogThis!Share to TwitterShare to FacebookShare to Pinterest
Labels: families