Hayley Tamaddon rocks as Roxie in Chicago The Musical 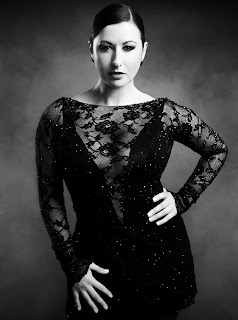 
I'm a firm believer in not knowing what our favourite Corrie stars are truly capable of until - and unless - we see them outside of Coronation Street. 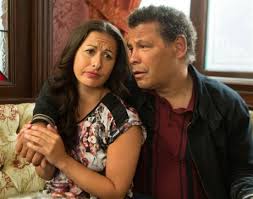 Within Coronation Street, actors are constrained by their soap characters, destined to sit in the Rovers and frown. I's all about how they're written and how they're meant to be within the confines of a back-street up north.  For many actors this works to their advantage while others struggle to fit. Hayley Tamaddon's character of Andrea was one of those I struggled to like in Corrie. Mind you, anyone who was brought in to cause friction in the budding bromance between Lloyd and Steve was never going to be popular in our house.

But Andrea had something about her, a cheeky sense of humour, that could have been exploited more. Remember when she got drunk and sang Tainted Love?  If only we'd seen that side of Andrea more, who knows what might have happened.  As it was, she left Corrie with Lloyd in the live episode to mark ITV's 60th birthday in September last year.

And what of Hayley Tamaddon since then?

Well, she's currently starring in the touring production of Chicago the Musical and I went to the show at the Sunderland Empire last night.  Hayley plays the starring role of Roxie Hart and she sings and dances her way through the show in fantastic style.

Despite my seat being up at the back of the dress circle while watching Chicago, Hayley projected such emotion, sexiness, acting ability and chemistry all the way up to my row - and beyond.  She really was amazing to watch. Her singing voice is fantastic, comic timing is perfection and I can't rave on enough about how flamin' great she was.

I've seen Chicago live on stage before, in that London many years ago. Admittedly, I only went to see it back then because Alison Moyet (of whom I'm a BIG fan) was playing the role of Mama Morton. This time around that role goes to Mica Paris who is well worth seeing too.

If you are in the UK in the near future and get a chance to see Chicago the Musical at a theatre, do go. The UK touring schedule is here and if you're in the north-east, it's running at Sunderland for the rest of this week.