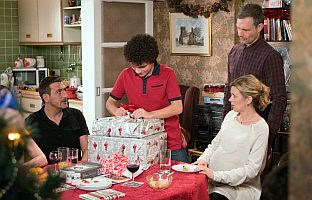 Bethany attempts to put a move on Gary but then lies that she has feelings for an older man. Gary makes wrong assumptions and Bethany reaches for the wrong sort of help for her misery. Andy turns to thievery in desperation and Steph ends up accused. Norris turns to social media to find Jude. David confronts Shona. Maria makes a dangerous mistake. Aidan and Adam face off and later, Aidan makes a confession and a promise. Nick continues to clash with Peter. The Barlows hold an early Christmas for Simon. Nick thinks Peter's secret woman is Leanne. Maria finds out her sentence.  Will she spend Christmas in jail?