The episode only lasted 30 minutes but it was a real mix of lovely things and "wait, what?" moments, too.

We've finally seen the end of the Caz storyline and I bow down in thanks to the Soap Gods for that. It was consistent, I'll say that for it. This story has been full of plot holes. We've mentioned this before and they continued to mount up right to the last episode. Kate conveniently connected a camera purchase to one Caz made in the past for a mate in the army and instantly knew it was in the flat (where the police didn't find it but where Caz had no trouble picking it up off a shelf or something) and she took the leap that Caz was probably watching so she played into it and lured Caz to the flat.

Aidan and then the police showed up almost instantaneously which surprised me  after they left Aidan waiting at the factory the other day for a very long time. They wouldn't believe him any more today than they did then. Caz has finally been dragged away and I bet that snotty police detective never apologizes to everyone for giving them such a hard time. Maria's out of prison but with the next legal battle hanging over her head, she's not particularly happy. I don't think they'll send her to prison twice, though I could be wrong. Beth didn't have to go to jail for deliberately committing bigamy so maybe Maria will be joining her on the community beautification program. 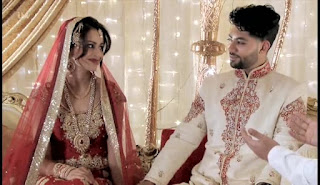 Zeedan and Rana are wed and the morning after they're more concerned with getting some of Yasmeen's jewelry back than basking in the afterglow of their first physical encounter, something they've been dancing around for months. This would likely be Zeedan's first sexual experience. Either he spent the night distracted by wondering "where did you learn *that*?" or miffed that she had to show him what to do but they certainly didn't act like they spent the night in honeymoon heaven. There wasn't a giggle or a cup of tea in bed...nothing.  Mind you, they probably spent it with Grandmother in the next room so it was probably a bit low key.

With the very short time frame between their engagement and wedding that didn't nearly happen, I'm not surprised they haven't talked about when to have children. At the tender age of 21 (Zeedan) and approximately 23 (Rana, as Alya's friend would be a little older than him), and considering that they've only known each other under a year, they barely know each other. Zeedan's premarital wobbles were probably justified. Then Rana went running for the birth control pills, stolen from the (probably) sample cabinet at the health centre when she's probably already taking them. I don't get why she'd have to steal more of them, just make sure she gets her prescription renewed. I didn't need to be clubbed over the head with that one, all we had to do was see her looking at the package of pills in her handbag which is stupid, too, and contrived, because nobody I know carries them around in their bags but at least it's legal! I don't see this lasting a lifetime, do you?

Tyrone has invited Freddie back to be their lodger, assuring him that Fiz and the kids miss him and would love to have him back full time. On the surface, that's a lovely gesture. In reality, he did it without asking Fiz and that might not go down quite so well. Also, isn't that where Alya is kipping at the moment? It must be like Euston Station at rush hour in there at the moment. I like Freddie, and I'm glad he is going to be in the show for the foreseeable. 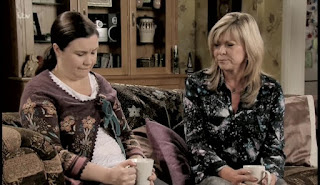 Mary has had a health crisis and Erica was right there by her side supporting her. I think that's lovely. Mary might not believe the doctor and want a further test to make sure and that's her right. I might feel the same way if I found a lump that wasn't there before. There's something else going on with Mary, though, and I'm looking forward to the rest of her story.

I'm really glad they're working Mary further into the fabric of the street. When she first turned into a permanent character, she lived in a motor home and her whole world seemed to be only Rita and Norris. Roy and Hayley were stuck on but that was a contentious relationship at first. Then they struck gold by putting her with the Alahans after Sunita died and she really came into her own. She has a home now with people who depend on her. She and Erica had a rocky start because she felt threatened by Erica's presence in her domestic world but they have grown to be good friends and it really works. Now that the twins need her a little less, they've added Tracy Barlow into the mix and it has been a genius move. She's really only a little older than Tracy but seems to have taken on the role of a quasi-mother/big sister. She still helps out in the Kabin and the cafe when her friends need her and she still entertains us with her quirky, wonderful stories. Patti Claire has really impressed me of late.