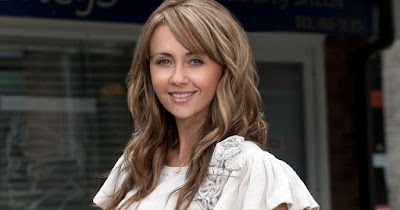 (This post was originally posted by Ruth Owen on the Coronation Street Blog in November 2016, reposted with permission.)


It was a real pleasure to meet and interview Samia Longchambon, who plays Maria Connor in Coronation Street.  Samia was a great interviewee - very interesting, very warm and she really ran with the questions and was happy to explore possibilities and issues.

Viewers have witnessed Maria’s distress as Caz, on whom she took pity and took in when she was desperate, has turned on Maria, when she rejected Caz’s romantic suggestions and then told her that it would be best if Caz left.

I began by asking Samia if she enjoyed seeing herself play Maria on television
I watch the show to see where I’ve gone wrong and to see what I should do differently – to criticise myself, basically. I think I’ll give myself a day off from it on Christmas Day though.

Do you feel that you are following in Deirdre’s footsteps, when she was put in jail and the campaign Free the Weatherfield One began?
That’s what I thought when I first heard about this storyline – although Deidre wasn’t guilty and Maria kind of is. She’s not guilty the first time they put her behind bars – she’s not guilty of murder.
She’s going to be someone’s b....  I can’t say that word! She would not cope. I keep saying she’s going to come out with a tattoo of someone’s name on her chest, or a teardrop tattoo on her face or something. She wouldn’t cope very well.

Aidan and Maria are getting closer. Is it love or lust?
Caz is unwittingly pushing them both together. Aidan is convinced Maria hasn’t killed Caz. Anyone who really knows her, knows she’s not capable of murder. David is really behind Maria and Aidan. He is really gunning for her to be found not guilty. It pushes Maria and Aidan closer together over a period of time. You see her warming more and more to him. There’s that attraction there between them both. It’s building and building. There’s a couple of times when you think, are they going to kiss? and then they don’t, or they get interrupted. If you see how I look in these episodes, it’s certainly not lust.


I’ve been fighting with the make-up girls for more make-up and they’re like, nope, you wouldn’t be wearing make up for this. So, it has to be something deeper for Aidan, because I’m not looking my best. I think he genuinely does love her. He just wants to protect her. He sees himself as her knight in shining armour really and so does she. He’s her hero. He believes in her when a lot of other people don’t. Aidan’s the one person who believes she’s innocent, apart from Kirk.

He’s with Eva, so Maria’s aware that she shouldn’t be having these feelings, but she just can’t help it. They’re family as well – there’s that long history – she was married to his cousin. There’s a back history that we haven’t seen. There are a couple of times when he makes her feel really cheap. He kisses her, then won’t tell Eva – he wants his cake and eat it

What advice would you give to Maria concerning Aidan?
My advice to Maria would be to stay away! I would run a mile from him. Even Shayne is saying that himself. He’s like, ‘God, I can’t defend myself.’ When she finds the scissors, she realises that Caz has well and truly stitched her up. She realises then that it’s really serious and she could go to prison. Maria and Aidan are making the worst decisions ever – they’re hiding evidence when they should just be telling the truth.

Why does Maria let Adam Barlow turn her head?
Adam Barlow, ah yes. – it’s making Aidan jealous. He doesn’t really want her. She’s being reckless - she sees Adam as a distraction and a way to get Aidan jealous.

And what will happen when/if Maria goes to prison? And what about Eva?
Two possible prison sentences in the space of a month – that’s quite a record that is! For different things. If she does go to prison, she won’t come out the same person. It definitely would change her, but I’m not sure how. The usual sentence is 12 months if you have a sham marriage – it depends if they make an example of her. Eva and Maria are polar opposites. If I was him, I’d stick to Eva – she’s far less trouble!

And Caz?
No one seems to have warmed to Caz’s character, which means we’re doing a good job. She’s a true baddy. I hope everyone is #TeamMaria on this one.

Do you enjoy acting out the bad times?
This year is up there with when she lost Liam – but then she got engaged to Liam’s murderer. This year may take the biscuit though.

And what about Luke?
Luke is too reliable. She doesn’t go for reliable and safe – she just didn’t have that spark with him. - it’s like careful what you wish for.

What would you like to give Maria for Christmas?
For Christmas, I want freedom for my character. Liberty for Maria – that would be lovely. Don’t know if she’s going to get it though. Peace and love for everyone else.

Do you feel lucky to have your job?
This year has been amazing. It’s been one fab story after another. I enjoy it – I love my job. But, when I’m at home, I try and just be mum.

Does Maria annoy you?
Maria frustrates me a lot. I love her, obviously, I’ve stuck with her my whole adult life, so there’s something about this character that I do love. But, despite everything she’s been through, she’s still got this incredible naivety – she’s so gullible. It’s really frustrating. When I read the scripts I think, “God, you’re so stupid!” You will her to have a happy ending, but I don’t think she’s ever going to get it.

How do you switch off after a drama-filled day on set?
I try not to take it home with me.  Especially this stuff - it’s been really dark. You’re spending ten hours a day pretending to be depressed and fed up and looking at a prison sentence. So I’ve tried to leave it here at Media City and then go back to being mum at home. When I leave the gates, I put on my happy music and the drive home is my way of shaking off the stress.