All about the venue for Coronation Street's double wedding 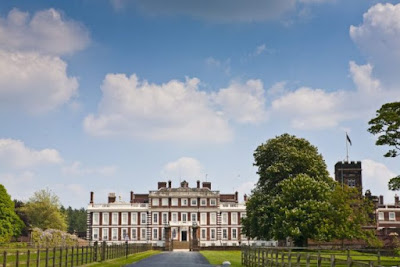 
The venue used for filming the double Coronation Street weddings that we'll see on screen next week is Knowsley Hall in Prescot, Merseyside. 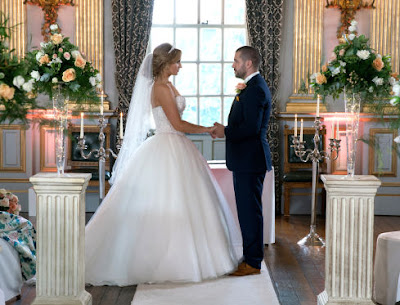 Knowsley Hall is set within 2500 acres of a private walled estate and home to The Earl & Countess of Derby. Beautiful landscaped gardens and a lake make this a very romantic and peaceful setting and vows can be exchanged in the majestic splendour of the Stucco Ballroom with a capacity of up to 144 guests. 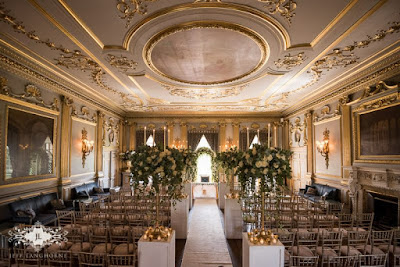 
This might be a great stop for any Canadians that happen to be in the UK in October.

Our youngest blogger Michael Adams has collected a sizeable collection of bits and pieces from Coronation Street's history. Visit his website here.

And next month they will all go on display for fans to see.The town in which Michael lives holds a festival each October called Houghton Feast. The chairman of the heritage society which arranges this event is Paul Lanagan of @CorrieArt. Michael's impressive collection of Corrie costumers, props and memorabilia will be displayed on Saturday, October 7th 2017 between 11am and 3pm at the Houghton Blind Centre. 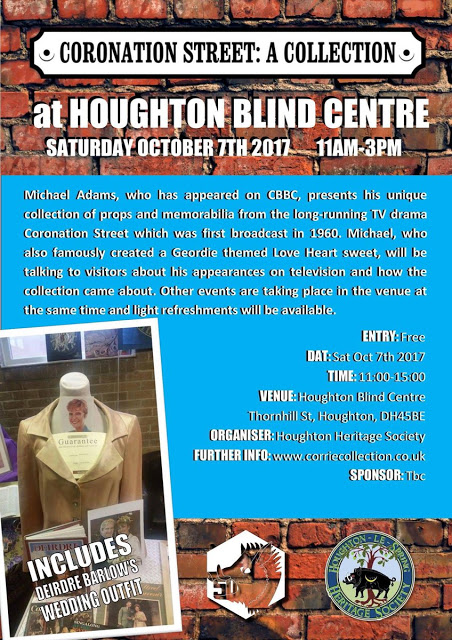 If you're in the area, do come along and chat to Michael. I'll also be visiting too!Be sure to follow Michael on Twitter, @MichaelAdamsUk for all the latest updates on the event, and the official Twitter accounts @CStCollection, @HoughtonFeastHQ and @HoughtonHeritag. 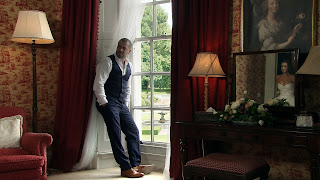 (This post was originally posted by Emma Hynes on the Coronation Street Blog in September 2017, reposted to this blog with permission.)

Things aren’t half hotting up on Corrie, as the double wedding of Johnny and Jenny and Aidan and Eva approaches. With Eva continuing her revenge mission against her husband-to-be, I met with Shayne Ward who plays Aidan Connor at Coronation Street studios in Manchester to hear all about his character’s approaching nuptials. For those wishing to avoid spoilers, it might be best look away now.

Aidan has cheated on Eva with Maria, this we know. But, he is arguably paying too big a price for his deceit by being led to believe he’s to be a father by his furious fiancée. So, does Shayne feel sorry for Aidan, or does he think he has brought it all upon himself? “It's never acceptable to have an affair, but he absolutely fell in love with two women from the get go” Shayne explains. “And he just wishes he could have found someone that had both their qualities.” He continues, “When he first did the affair and it stopped, Maria then instigated it again and I think the moment that Aidan agreed that, you know, you have to keep it a secret, that’s when he became a bit of a love rat. He didn’t set out to be a love rat, but he genuinely was in love with two women so I think what he gets at the minute, he does deserve.” 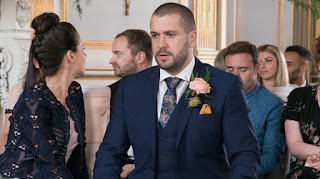 We know now that Aidan flattens the fizz on Eva’s revenge plan by confessing to his affair on the day of their wedding. But why does Shayne think his character decides to do this? “A little while back Aidan was going to confess anyway as Maria gave him an ultimatum – tell her or it’s over – and he was going to tell her” he recalls. However, the prospect of becoming a Dad makes him so excited, something Shayne says he can relate to. “He didn’t know who to be with, but when she tells him she’s pregnant he decides to completely focus on her" he explains. Shayne reveals that a conversation takes place with his sister on the day of the wedding that makes him wonder if he can go through with harbouring such a deceit. “Kate says something to me that changes my whole opinion of ‘was I going to keep it secret all this time?’ or ‘could I live with a guilty conscience?’”

I asked Shayne if Aidan will enjoy the build up to the wedding or if he will be in guilty turmoil until he confesses. “Completely guilty" he tells me, "because he doesn’t want to live with something like that type of secret, that’s why he does tell her on the day of the wedding ‘Listen, I’ve cheated’” 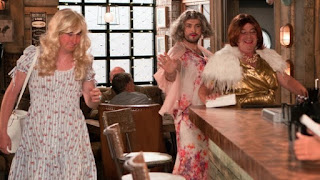 Regarding his stag night, in which Aidan and company cut quite the dash as ladies on the town, Shayne says of his costume, “I remember when I first looked at it and I thought ‘Oh, can I not be sexy?’ and I thought ‘Hang on Shayne, you’re getting a bit carried away there, like.’" He adds, “I was the only one who kept the heels on. I don’t know if it’s because I’ve got three sisters, I don't know but it was like ‘Shayne, you don’t have to keep it on’ and I was like ‘I want to, for the art. It’s just in case the Director says you have to walk across cobbles and he went ‘Shayne, you’re not going outside’. I kept it on for dinner and walked up the stairs and didn’t take the lift. Can I get an amen for the women because I tell you what, I take my hat off to you, how you walk in heels I don’t know.”

Asked if people shout at him in the street, Shayne says “I love it because it’s helped my confidence in terms of my acting ability, the fact that people find it believable because a lot of people see me now and don’t see Shayne, they see Aidan Connor - ‘It’s Aidan, it’s Aidan!’ - and that’s great for me because it means, you know, that I’m obviously doing it right and they’re believing it.” He adds, “I love playing Aidan Connor, I think it’s brilliant."
We also know that Alison King is set to return to the cobbles to reprise the role of the inimitable Carla Connor. Asked if he’s looking forward to her return, Shayne says, “Very excited. We all are. No-one knows what’s going to happen when she comes back and I quite like that, it’s quite secret. For me personally she’s one of the most captivating actresses I’ve ever watched on screen. She was in my first scene” he recalls, “she just made me feel so relaxed."

Speaking of his experience filming this storyline, Shayne says, “I’ve had a wicked time with Cath and Samia. It’s been a brilliant love triangle and it really helped the fact that we’ve known each other anyway for years so it’s been so much fun.”

I think Shayne has done a great job in making us feel sympathy for Aidan despite his infidelity. No matter the outcome, I’m sure we’ll be glued to our screens this coming week as it’s not just a double wedding, but double Corrie, with Wednesday heralding the start of the sixth weekly episode. 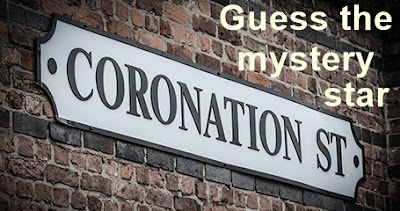 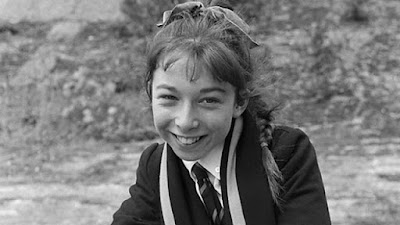 Every day for the past two weeks, we've been running a series of old pictutes of some of the past and present Coronation Street cast.

You may well have seen these pictures before, in which case they'll be easy for you. But for those of you who are new to seeing these pictures, I hope you find them interesting and they give you a smile too.

Leave your guesses as usual in the box below.  There's no prize for getting it right (sadly) and it's just for fun - so don't ring in.

5 Things We Learned In Corrie This Week 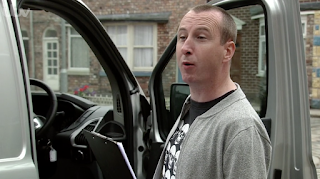 Kirk has the soul of a poet.  With his tribute to pregnant women - "like ripe blossoms, with big bottoms" - and his ode to Aidan - "you're the best boss ever, and you're name's not Trevor" - Kirk's a shoo-in to replace Carol Ann Duffy as Poet Laureate. 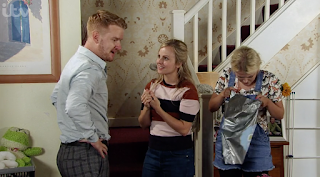 Gary is a big fan of Rupert Bear.  I can think of no other explanation for those trousers. 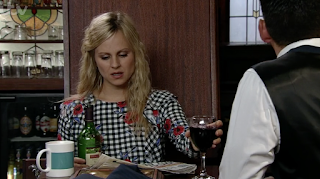 The Rovers is very generous with its measures.  Even I, a professional alcoholic, wouldn't fill a wine glass as much as Sarah-Lou.  No wonder she keeps bunking off her shifts; she must be costing Peter and Toyah a fortune. 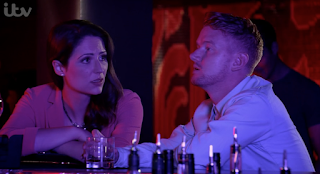 Weatherfield's club scene is very small.  Three groups of people left Coronation Street for a night on the tiles, and they all ended up in the same bar.  Either StreetCars is on a back hander or the age of austerity has hit Weatherfield's nightlife pretty bad.  Alternatively, given you could still see daylight outside, maybe 'Cloud 99' was the only club that opened at four thirty in the afternoon. 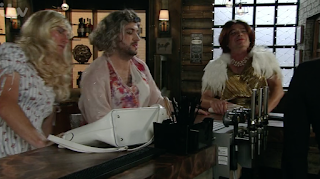 RuPaul's Drag Race has finally reached Coronation Street.  Ladies and gentlemen, welcome to the stage... Miss Nesta Tables!  Let's be honest, we'd all pay good money to see Johnny lip sync for his life.  And with a beard like that, Aidan is a dead ringer for Kandy Ho.

Today it's the award for Best Exit.

Up for nomination are:

Today it's the award for Most Sexiest Female

Up for nomination are Catherine Tyldesley (Eva Price) and Helen Flanagan (Rosie Webster).

Today it's the award for Most Sexiest Male

Up for nomination are the gorgeous Mikey North who plays the fabulous Gary Windass and Sam Robertson (Adam Barlow).