Did I tell you my fella is an artist? 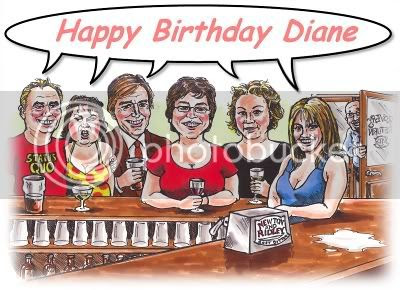 Well he is. He draws me cartoons for my birthday and Christmas cards and injects some great humour into them. He always puts himself in the cartoon somewhere too even if he's not the focus of it. This was the one he did for my birthday last year! Obviously, Coronation Street themed which is why i'm blogging it here! In case it wasn't obvious, that's me in the pub with Les, Cilla, Ken, Eileen and Shelley.


Here's another really quick cartoon he did a number of years ago. It's Doctor Who meets Albert Tatlock (with Fred Gee and Bet behind the bar)

I met him in the sorcerynet Coronation Street chat room just before New Year's Eve, 2003 via a mutual friend. He lives in Salford and the mutual mate lives in Vancouver. Quite a stretch! We met face to face the first time July 12, 2004, and we got engaged last year. No idea yet when we'll get married but he'll move here eventually. He's a fan too, though not as much as me, and he's actually been watching it longer, having grown up with it. His dad still watches, too. 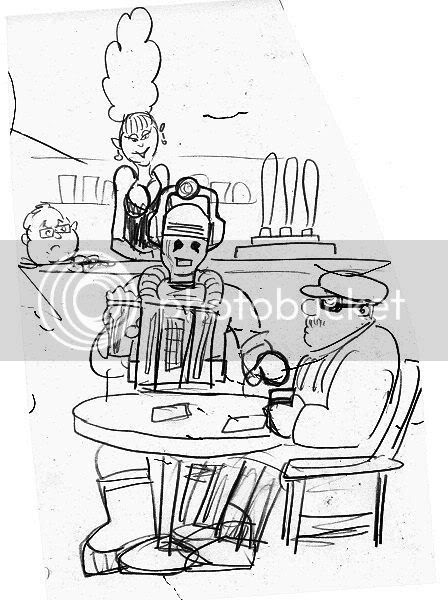 There have actually been a few couples that have met and ended up together, via that same chat room, the most recent duo got married last summer and he'll be moving to Toronto very soon. Another couple lives in Buffalo, they're another UK/North American couple and there are a few more couples where both halves lived in Ontario and found each other. Another pair live in the U.K. after she moved there.There were a couple of romances that didn't work out, but most of the ones that formed did. Many, Many good friends also met in #coro_street. Sadly the chat room is pretty empty these days, with a few in on Friday nights for the trivia quiz and maybe on Sunday nights after the UK broadcast. In it's heyday, though, it was busy all weekend long and there was usually someone to chat to in the weeknights and sometimes in the weekday afternoons too. People get busier, don't have the time. We had some trouble with a couple of people that were thorns in the sides of others and that seemed to cause a few people to leave and when a beloved older member died suddenly, it felt like the heart went out of the place. Still, we do keep in touch a bit, and still care about each other's lives.

Hmm, this didn't start off to be about the chat room, it just sort of leaned that way!
Posted by Tvor at 16:48