Bethany and the Bullies 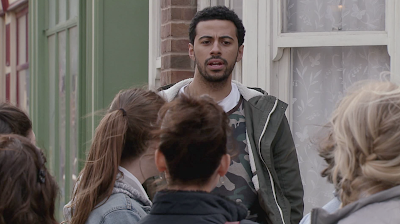 (This post was originally posted by Ruth Owen on the Coronation Street Blog in April 2016.)


The bullying storyline involving Bethany and Lauren, plus a few of Lauren's hangers on, has, in my view been brought to us most effectively.  Teenagers are complex creatures and we should never believe the mother or father who claims to know everything about their teenager and tell you how very close they are. One aspect of a teenager's life that is very well developed is the art of cunning. They allow those at home or at school to know only what they want people to know. They dissemble frequently.

At home and amongst her family, Bethany can be a real annoyance. She is rude, self-absorbed and embarrassed by her family, as most teenagers are, at least to some extent. The arrival of baby Harry though has been good for her. She has really taken to her little brother. So it was particularly upsetting to Bethany that Lauren and her crew took it upon themselves to insult Harry. The insult though,wasn't really directed at Harry, but was merely a device to maximise the bullying of Bethany and to further undermine her.

It has been interesting, though at times disturbing, to see Bethany in another light. At home she is confident, even cocky, but surrounded by these mean girls, we can clearly witness her terror. The scenes are well acted, credible and happen every day - if not face to face then in cyber world through social media. One positive aspect to come out of the bullying is that Bethany now seems more likeable and certainly more vulnerable.

How gratifying then that the hero Luke - tall, dark and handsome - driving a swish car to boot, should pull up, invite Bethany in and leave in their wake,  the mean girls open-mouthed with surprise and envy.