Celebrating 15 years of the Fiz-Bomb on Coronation Street 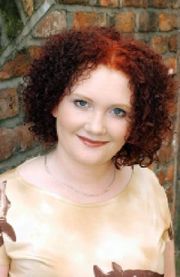 Today, 15 years ago, Jennie McAlpine's first scenes as Fiz Brown aired on Coronation Street. She turned up in the factory with ideas of becoming a clothes designer. But as with such dreams in the back streets of Weatherfield, they turned to nowt and she's been knicker-stitching ever since.

In my Coronation Street weekly update for April 2001, I wrote this about the arrival of Fiz:

"It's Roy and Hayley's 2nd wedding anniversary (hasn't time flown?) and while Roy wants to spend some time with his wife down at the boating lake where they had their first kiss, his plans are thrown awry by the arrival of foster girl Fiona - Fiz, for short.

Fiz is a bit, um, lively and soon has Hayley out shopping for clothes that Roy doesn't approve of. Unfortunately, she also sets the cafe on fire when the Croppers are out at the Rovers. There's smoke and flames everywhere but when Roy chastises Fiz for the mess she's caused, Hayley chastises Roy for the way he's carrying on."

She's come on a bit since those heady days and I wouldn't want Coronation Street to ever be without her!