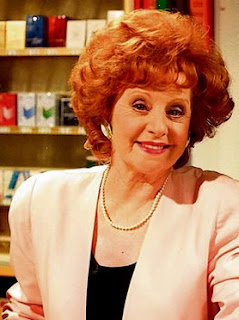 A personal favourite of mine, Rita first appeared in 1964 as an old friend of Dennis Tanner. She was not seen again until 1972. Over the course of 44 years, flame-haired Rita has matured from saucy songstress to pillar of the community.

After a fling with Ken Barlow, Rita fell for Len Fairclough. They had a tempestuous on/off relationship with Elsie Howard being a thorn in Rita’s side many times. After breaking off their original engagement in 1974, Rita and Len married in 1977. Rita had to drag Len from his bachelor life and forced him to make renovations to their house. Happy with her house, Rita’s mothering instinct came to the fore. Failing to adopt, the Faircloughs became foster parents to the likes of John Spencer and Sharon Gaskell. Their marriage lasted for six years, before Len was killed in a car crash. Rita was devastated when she learnt that he was on the home from seeing his mistress.

After being wooed by Tony Cunliffe and Alf Roberts, Rita became involved in a serious relationship, this time with Alan Bradley. Between 1986 and 1989, Alan cheated and stole from Rita and when she confronted him, he tried to kill her. She escaped to Blackpool and when he chased her across the promenade, he was fatally hit by a tram.

In 2011, Rita reunited with old friend Dennis and he moved in with her and they fell in love. They married in 2012 during the Diamond Jubilee weekend. Happy initially, Dennis soon grew tired of Rita’s nagging and always having to ask for money. He found solace in Gloria Price and she persuaded him to dump Rita and whisked him away to Spain. Dennis returned a few months later with his tail between his legs and tried to win back Rita’s heart. When she was on the verge of forgiving him, she caught Dennis punching Norris and stealing from the Kabin. She gave Dennis his marching orders and they divorced in 2015.

Since 1973, Rita has been behind the local newsagents counter, called the Kabin. Her scenes with her loyal assistant Mavis Riley (1973-1997) were mainly of a comedy purpose and this is repeated today with her partnership with Norris Cole. In 2009, she decided to retire and sold her share of the Kabin to Norris and went on a cruise. But when she returned, she found retirement boring and lonely. Norris persuaded her to be his assistant. But Rita still rules the roost!

Childless, Rita has become a mother figure to many over the years, notably Sharon Gaskell, Jenny Bradley, Sally Webster and Tina McIntyre.