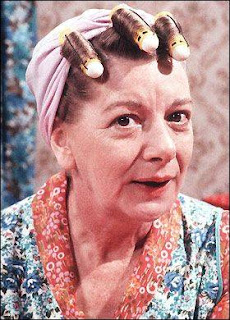 One of Corrie’s most iconic characters.

Married to Stan for 41 years, Hilda was known for her curlers and her warbling singing voice while cleaning and symbolized the working-class woman of Northern England. Hilda and hubby Stan were inseparable even though life was hard and they constantly bickered.

She was a cleaner and throughout her tenure she was employed as the Rovers cleaner. She constantly clashed with the formidable Annie Walker, who looked down on her and Stan. Hilda wasn’t afraid to speak her mind. As well as Annie, she had catfights with next door neighbour Elsie Tanner and even accused Elsie of having an affair with Stan!

Living at 13 Coronation Street proved unlucky for the Ogdens but it was Hilda’s palace – more so when a 'muriel' was installed and three flying ducks. Eddie Yeats lodged with them between 1980 and 1983 and the trio were very much a part of Corrie’s golden age.

By 1984, Stan’s health deteriorated and he sadly died, leaving Hilda heartbroken. After his death, her soft touch came out when she provided a home for young Kevin Webster and later his wife Sally.

Hilda left the street in 1987 and her neighbours gave her a farewell party on Christmas Day. She led the regulars in a sing-song of ‘Wish Me Luck as You Wave Me Goodbye’ and went to housekeep for Dr Lowther in Derbyshire.

Were you a fan of Hilda? Should she be higher?