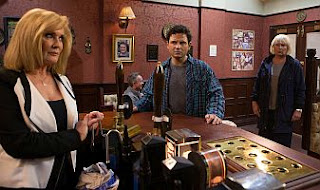 Jason finds out that Tony died of a heart attack which really knocks him for six, blaming Liz. Todd moves back in to support his brother. Phelan takes advantage of Jason's grief. Johnny and Phelan clash. We're all glad Steve is back. Billy is distracted by a young man in need. Rana's need to flirt gets her dumped by Zeedan. Nick seeks help for his increasing symptoms, but keeping the secret from Carla. Cathy asks Alex to move in to the cafe with her.