I guess Bethany is still getting it from all sides even at school. Nick throwing one of the handbags down hardly counts as assault. Anyway, the christening is on next week. Godparents are not going to be David and Kylie and Gail says it's only a token anyway but doesn't approve of asking Nick because he doesn't have kids. But Sarah wants Nick and Todd both as Godparents and that makes Gail freak out even more. Carla gets to be Godmother. Gail just can't get her head around any of it. 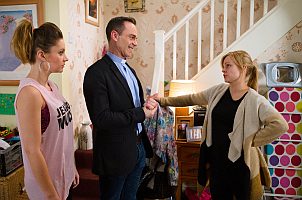 Todd was really touched about being godfather. He's also pretty good with the baby, as well. I think Harry's not sleeping and crying so much because he picks up on Sarah's stress and anxiety. Sarah figures the Christening will make everything right and she's putting a lot of high expectations on herself as well as the event. Except that Billy has a conflict and Sarah's freaking out. But never fear, the christening is back on again.

On the day of the christening, Sarah is still anxious and sleep deprived. Everyone has forgotten that it's Gail's birthday except Audrey and Maria so Nick takes on the task of organizing a party which he then delegates to Sally. Earlier on, he loses his temper after being on hold and having to navigate a bank's phone menu and fires the phone across the room in a temper, startling but not worrying Carla. He's also nasty to Sarah and sarcastic and David notices. Kylie notices that Sarah is very edgy and comments to David that she thinks Sarah has hyped up the Christening into a near exorcism. Sure enough, at the ceremony, Harry is fussy and crying and Sarah finally freaks and walks out, leaving Nick holding the screaming infant.

Gary got what he was looking for but he was caught on CCTV and Sharif now thinks Gary is dealing in steroids in spite of Gary going off on someone else a few months about about the very same thing of which Zeedan reminded him. It comes down to Sharif not really trusting Gary after the whole business with Alya so he upgraded the CCTV equipment and plotted to set up Gary. Zeedan approached him for steroids and as expected, Gary pointed out that stuff is for mugs. 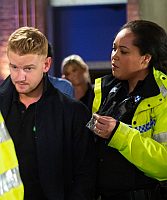 He continued to help out and get more marijuana. I thought he told the dealer to keep it away from the gym but there he is, walking in as bold as brass and Sharif is determined to bust them all. The dealer really is a baker, though. Odd choice but funny. Sharif's call to the police had results. You'd think Gary would know there was CCTV outside! Anyway, Dane was clean but Gary got nicked for the small amount of it he had and Anna tore a strip off Izzy when she found out Izzy was still using the stuff, too.

Everyone was up in arms when he was arrested and taken away. Erica tried to be the voice of reason and Anna was judgemental as only Anna can be. Sharif is judgemental too but in his position, with the gym at risk, of course he's going to follow the letter of the law. It's one of those issues that, although it's illegal, there is a case for medical marijuana. Izzy decided to go to the police and take the blame herself bringing the whole issue to the forefront. Her testimony cause the charges on Gary to go from mere possession to dealing. Oops. I think someone needs a very good lawyer. 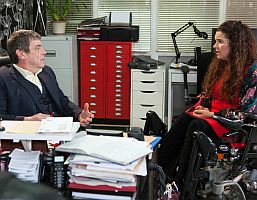 Izzy is suffering the barbs and ribbing of her friends as well as Anna's hard faced judgement. Her day gets worse. Johnny is concerned that Izzy is operating machinery while stoned though Izzy insists, and he can check with her doctor, that cannabis doesn't have that effect on her, it just takes her pain away. She might lose her job but Johnny's going to have a think about it during the day. Gary is also getting grief from Sharif about it all.

Maria is getting calls from someone named Pablo and he wants to see her. She's talking about "what we've done" and telling him she loves him. Oh dear. Has she been unfaithful to Luke? Audrey spotted them in the shadows. What's going on? Audrey tried to get it out of her but got the brush off. But instead of going to lunch with Luke, she lied and met up with a fella and Luke's surprise with flowers (nice ones, too!) turned up to be a surprise to him. Pablo happens to be her husband and he happens to be gay. It's a set up so he can get into the country. Maria, the dim bulb, didn't want to trouble her boyfriend with the details. Stupid woman. She never was the sharpest knife in the drawer.

Luke was flumoxed at Maria's news and angry. Can't blame him! Pablo tried to make it right with Luke. In a way, I guess he did. He and Maria got drunk on his "looney juice" and it's true, Maria could get into a lot of trouble. Luke can't get his head around it all and dumps her. Her solution? Dressing up in a costume, humiliating herself and begging Luke to take her back. It worked. They made up. In the back room of the Salon. I guess Audrey's trip to the wholesaler took quite a long time! Or not ;) 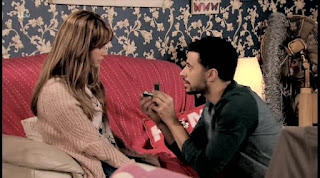 They offered to babysit for Tyrone and Fiz and Luke took the opportunity to propose! She might be daft but she's not stupid, she said yes! Luke and Maria are both getting congratulations from people though Sophie teased Luke about the gay husband. Luke didn't find it very funny!

Gemma fancies Jason like mad. Sinead isn't so sure she's happy with Gemma and Chesney being pinky swear mates. Well she did some more modelling and Chesney was off to Portugal the very next day. Seems a bit rushed, and assuming Sinead was going to be paid straight away to repay the cost of the tickets he had to have bought a few days before that. Timing, people. Now Sinead is sick and can't go so Chesney is going to stay with Katy and her mother instead of a nice hotel he'd booked for the two of them. Another reason for Sinead not to be happy because we know she's always jealous of Katy who's feeling very sorry for herself. 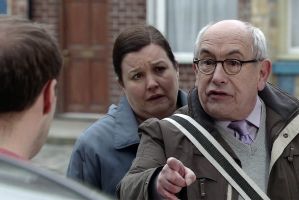 Tyrone has been gathering scrap and now it's all piled in the middle of the living room. Fiz is dubious but coming around to the idea. Rita cleared out her old unwanted stuff to add to the pile. But Tyrone has come up against Norris who's not happy about some of the clutter of the old bikes and things turning the Street into an eyesore and Mary's noticed the street signs missing. Norris, always able to leap tall conclusions in a single bound, naturally assumes Tyrone took them but he didn't. They've been removed for cleaning. Norris notices everything, you'd think he'd have seen the maintenance trucks, wouldn't you? He did apologize, though. Half-heartedly but he did and he gave Tyrone an old fridge. He was, however, dismayed at the idea that it was worth more than he thought but it was too late.

Nick doesn't normally lose his temper like that, not since the early days of his brain injury. But brain injuries never really heal completely. Anyway, he didn't expect to be asked, he expected to be grilled over what happened with Bethany's bullies but Bethany kept her mouth shut but Lauren and her mother came shouting the odds so the secret's out about both the bullying and Nick's temper.

David questioned Nick but he brushed it off but David is concerned. I wonder if it's lingering guilt. Nick doesn't think it's his old injury but he didn't waste any time snapping David's head off at the suggestion, either. David doesn't seem to want to leave it alone.

Izzy sped to the gym with Jake running beside her. At the start of the next episode, minutes later, Jake was sound asleep in her arms. It's supposed to be Kate's wedding day but of course it's all off. She's down in the dumps but barely speaks to Sophie who tries to be supportive. Ouch. Ken went to the christening with Audrey but his nose is out of joint when Freddie shows up!