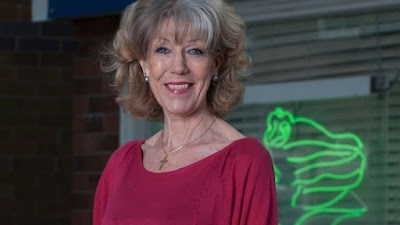 Audrey first appeared when she came to daughter Gail’s engagement party to Brian Tilsley. After the turning the heads of the street’s menfolk and annoying the women she made fleeting appearances until she married Alf Roberts in 1985.

Alf brought Audrey the stability she needed after living a single life for so long. Although chalk and cheese, with Audrey infuriating tight-fisted Alf by spending money on shopping and clothes. Originally a floozy hairdresser, her marriage to Alf made her of a higher status. She was in her element as Alf’s lady when he became mayor in 1994, but was miffed when Alf sacked her and appointed Betty Turpin in her place. Audrey and Alf were married for thirteen years and she was devastated when he died of a stroke in 1999.

Soon after Alf’s death she was charmed by booming butcher Fred Elliott and they became briefly engaged only for her to rebuff him as she felt she was unfaithful to Alf. Other dalliances since then have included Archie Shuttleworth, Keith Appleyard, Bill Webster, Lewis Archer and Marc Selby. She is currently smitten with recently widowed Ken Barlow.

In 2002, she fell victim to son in law Richard Hillman’s clutches. He convinced her that she was losing her mind and even tried to kill her by setting her house on fire. Audrey’s accusations led to Gail banning her from family occasions and sided with Richard. When Richard confessed, Gail felt guilty and apologised to her mother.

In 1998 Audrey bought the salon from Fiona Middleton which she still runs today and has employed the likes of Maria Connor, Candice Stowe, David Platt and Kylie Platt. She also won Alf’s seat after he retired in 1998 and represented the area until she lost to Curly Watts in 2001.

She shared a wonderful friendship with Alma Halliwell for many years and was heartbroken when Alma lost her battle with cancer. She also shares a strong friendship with Rita Tanner despite her jealousy of Alf and Rita's close friendship. But it is her scenes with Gail that are best remembered as they give each other honest advice and speak their mind.

Are you a fan of Audrey?