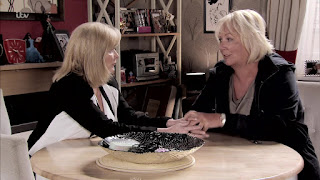 Eulogy: Liz and Eileen talking about Tony's big personality, and how he could make you feel like a million dollars, or worthless, but it was never boring.

Too Much Information (for Zeedan): Yasmeen recalling canoodling in a phone booth and reassuring her she still has a sex life.

Pot stirring award: Phelan, with a perfect little piece of passive aggression or subliminal suggestion which sent Jason straight to the pub to shout at Liz, exactly as intended.

Profound award: Sean's right. Even if it hurts to remember, it's not so bad either. We need to remember our loved ones and the things we loved about them.

One of those days: Kylie got bumped into twice, and had drinks spilled on her both times! 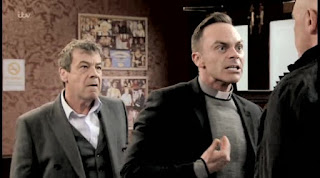 Billy Ballistic award: I did not see that coming!

High Noon award: Phelan and Johnny are now glaring into the sun at each other across the cobbles. I think Johnny's probably a worthy opponent, too.

Musical amabiance:"End of the Line" by the Traveling Wilburys when Todd found out that Phelan is moving in.

Soap Opera Phrase of Doom: Carla insisting nothing will stop her from becoming Mrs. Tilsley. (I groaned)

Lines of the week:
Yasmeen "What does a step ladder have to do with first aid?" and then "You might want to wipe that lipstick off your neck. or is it imaginary blood?" (Yasmeen wasn't born yesterday)
Michelle "Isn't it better to tell him?" (parallelling her situation to Carla's) Carla "And risk losing him? No, I'd rather live with the guilt" (because you've done that so well)
Tim "It's not the same going in the Rovers when the barmaid looks like she's going to cry in your pint"
Zeedan "You're my gran" Yasmeen "Doesn't mean I don't have a sex life"
Sean "I'm an events bee, a factory bee, and a bar bee"
Phelan "Wind'em up. Watch 'em go"
Zeedan "I'm a chef. My knife is my life"
Michelle "And what would you know about marriage?" Aidan "Granted, it's only a view from the stands but sometimes you can see things more clearly from there"
Sally "Tim will be attending to my shrubbery later" (how do they get away with this stuff! LOL!)
Sally "There's a downpour forecast" Kevin "Have you been dancing again, Sal?"