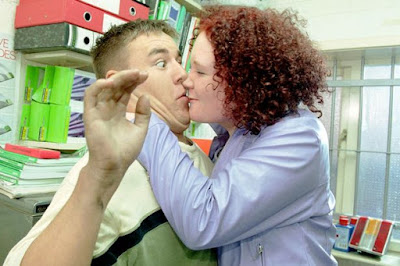 Jennie McAlpine last week celebrated 15 years on Coronation Street as Fiz.  In a good interview with the Mirror, the actress talks about playing Fiz in Corrie and reveals her favourite scenes. It's worth a look just for some of the old pictures, such as the one above.

Jennie says that there are two moments that Corrie fans always want to talk about when they meet her.  The first one is Fiz's topless rooftop demo when Mike Baldwin sacked her from Underworld. And the second is when Schmeichel the dog leapt into the bath with Cilla and Les, making them crash through the ceiling.

Jennie tells the Mirror that she is a big fan of the soap’s early days of Ena Sharples, Minnie Caldwell and Martha Longhurst.

She said: “Go into a pub in Salford now you’ll hear those same conversations, it was totally timeless. I love doing scenes with Sue Nicholls, who plays Audrey, she makes me laugh every time.”