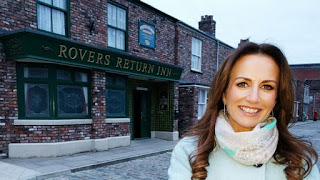 (This post was originally posted by Emma Hynes on the Coronation Street Blog in March 2016, reposted to this blog with permission.)


On Friday 25 March, Corrie viewers in Ireland were treated to a behind the scenes look at their favourite show courtesy of UTV Ireland. In Access Coronation Street with Lorraine Keane, the Irish television presenter, broadcaster and journalist takes a tour of the set which includes interviews with those both in front of and behind the camera, and is accompanied by clips from the show.

While a rundown of the show's history and viewership offers context, the emphasis is very much on contemporary Corrie (the 2015 bus crash is the oldest clip I spotted). Shayne Ward fans will be glad to know he not only acts as tour guide, but is the focus for the first half of the 22 minute show, with other interviewees even giving their complementary takes on the singer and actor. This isn’t wholly surprising for a programme broadcast in Ireland considering both Shayne and his character Aidan's Irish family connections, and his strong Irish following in his X-Factor days and beyond, having charted highly in both the Irish album and single charts. He also travelled to Dublin in September of last year with Faye Brookes and Richard Hawley (Kate and Johnny Connor) for a UTV Ireland event which saw one Dublin pub transformed into the Rovers Return for a day. 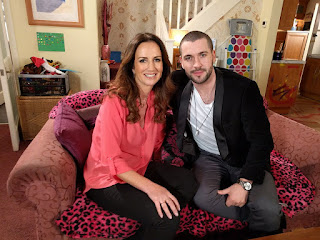 Talking in the Platts about how much he loves being on Coronation Street and enjoys the challenge, Shayne and Lorraine playfully act out a recent scene between Aidan and Eva, He then confidently whisks her through some backstage areas. The highlights include glimpses of Liz McDonald's clothes rail, the trophy cabinet, the wall of fame and snapshots of the work of Costume Designer Tracey Cliffe, Art Director Andrew Hare, and Make-up Artist Kathy Ducker.

Lorraine is on set for two scenes; the first, which happens to be the first of the day, is Kate and Caz's hen party in the Rovers, and the second is one involving Maria and Luke outside the salon.

In her interview with producer Stuart Blackburn, it's interesting to hear he gets the bulk of his script reading done from as early as 4.30am in the morning so the rest of the day is free to deal with the myriad things that can arise. His lips are firmly sealed on future storylines however, and he admits he doesn’t even tell his own mother what’s coming up even though she loves the show. At the time of filming, he had started editing, in script form, episode 8912. I couldn't resist checking if this episode had since aired, and it transpires that the latest, Friday's second double which I reviewed, was numbered 8868, so this episode is some way off yet.

One of the highlights of the show is Lorraine's chat with Sue Nicholls in Roy's Rolls where she talks character Audrey's upmarket residence on Grasmere Drive, her relationship with Ken, what its like to pretend to be a hair dresser, and how lovely she finds it that people see her as Audrey and call her such in the supermarket. Ladylike and gentile with a twinkle in her eye, it is a delight when Lorraine thanks her and she reciprocates ardently before saying to camera with great sincerity “can I thank everybody back in your home for watching, we love you to pieces and thank you very much". Just when you thought she couldn't endear herself any further, a great little outtake-style scene appearing alongside the credits confirms what a diamond she is. 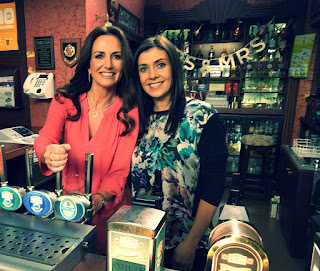 Over at the Rovers, Kym Marsh and Lorraine discuss her ten years on the show as Michelle, one of Lorraine's favourite characters. Both jump at the idea of taking Corrie to Dublin, but Kym insists that Lorraine would have to agree to being an honorary Connor; she'd certainly look the part.

Lorraine interviews Catherine Tyldesley on the cobbles about being constantly made-up and glamorous, and the fun of playing a feisty, funny, sometimes bitchy, character, while Michael Le Vell talks of his love of working on the show 33 years on before being affectionately ribbed by Lorraine having admitted to not knowing an awful lot about being a car mechanic.

I very much enjoyed this nicely paced, good-humoured tour of the cobbles which left me wanting more; indeed, I would've liked for it to have been a little longer. Lorraine is the ideal presenter for a behind-the-scenes look at a programme which means so much to fans. Excited, enthusiastic and well informed throughout, she has a lovely knack of being at the centre of something without making it about her, and as such, viewers will undoubtedly have felt they were sharing with her what was clearly an enjoyable visit.

Viewers in Ireland can see Access Coronation Street with Lorraine Keane on the UTV Ireland player.