Has Carla and Roy's friendship rang true for you? 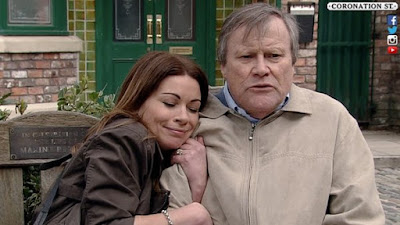 An interesting discussion has broken out on our twitter feed @CoroStreetBlog about Roy and Carla's friendship.  It's a relationship that has always felt rather forced to this Coronation Street fan. I kept quiet about that for a long time because I love Roy and I've grown to love Carla - but the two of them together? Nope.

When I admitted this on twitter yesterday, a few fans naturally said the opposite, that they enjoyed the friendship. But one person came out of the woodwork to admit that like me, they too have struggled to accept these two as friends.

I think part of the problem, for me, is that Carla was thrown together with Roy by the powers-that-be at Coronation Street to make Carla appear more fluffy than she actually is.

ITV admitted that here.
ITV's drama director John Whiston said about Alison King: 'She is a consummate actress but somehow she was not breaking through in the research. We thought, 'What can we do to show a different side of her? She had a soft spot for Roy Cropper - this strange character we all love. That boosted her image and it showed she must be a nice person to like Roy.'

So, has it worked for you, this friendship between Roy and Carla?

It's weird and phoney.
I hate when they manipulate us like that.

It's a beautiful tribute
to Haley, who brought them
together as good friends
who look out for each other.