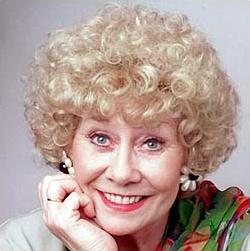 For over 30 years, the late Vera Duckworth was an iconic figure on the cobbles of Coronation Street.

Her perm, her foghorn of a voice and huge earrings became legendary. Originally working at the warehouse, she was later hired as a machinist at Mike Baldwin’s denim factory, a post she held for 13 years. For twenty years, her best friend was Ivy Tilsley.

Married to Jack for over 50 years, they constantly argued and their marriage was tested many times. But deep down they were soulmates. Jack and Vera, like Stan and Hilda Ogden before them, were involved in many hilarious antics and their marriage is classed as one of the best partnerships on the soap.

They moved to Coronation Street in 1983, with wayward son Terry. Terry caused heartache for his mother over the years. He broke her heart when he devilishly sold his son Tommy to his in-laws.

After Vera was made redundant from the factory, she worked at the local supermarket and in 1995; she became the Rovers landlady, following the footsteps of Bet Lynch and Annie Walker. Jack and Vera were behind the bar for 3 years, before going bankrupt and then returning to 9 Coronation Street. Her last job was a cook at the local café, Roy’s Rolls, and when she fell down the stairs, she decided to retire.

Jack and Vera celebrated their golden anniversary in 2007. A few months later, Jack and Vera decided to move to Blackpool. Sadly, Vera died in her armchair before they moved, ending an era on Coronation Street. Vera did appear again in 2010 in ghost form.

Were you a fan of Vera?