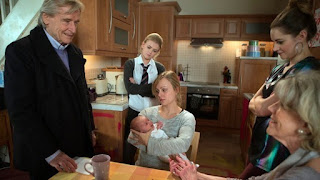 (This post was originally posted by Emma Hynes on the Coronation Street Blog in April 2016, reposted to this blog with permission.)

Life is not what you’d call easy for Sarah Platt at the moment. As if living with the dreadful secret of Callum’s death and his presence beneath the floorboards in Gail’s annex isn’t enough, she has just given birth to his son, Harry. I travelled to ITV in Manchester to chat with Tina O’Brien about what lies in store for Sarah.

In Monday’s double Corrie we saw her struggle to hold it together having been awake for 37 hours, and anxious to arrange a christening for Harry. Are we heading towards the moment when Sarah finally cracks?

“She has a bit of a meltdown, yeah. She gets really overwrought, and it’s too much. She wants the christening to be perfect, and when it isn’t she thinks it’s because something’s wrong. But I think a lot of it is down to being overtired.

"She's got a lot of anxieties and I think it's probably post-traumatic stress to do with Callum."

So does Sarah love her little boy, or is she scared of him?

“I think it's going to be a bit of both. Obviously he’s a boy, and there are all these fears; ‘is he going to be like Callum?’ and she doesn’t want that obviously, but she does love him, yes.”

Does anyone pick up on Sarah’s odd behaviour or do they think she’s just tired?

“Kylie does. She gets her and I think she understands what she’s going through more than most people.

"She’s been through an entire 6 months of nightmarish things to do with Callum and covering that up."

"I think with the Christening, she wouldn’t dream of telling anybody that she's got these thoughts in her head and actually I think it’s for the audience to guess. These are the deepest secrets that you don’t want to tell anybody. So I think she’s trying to really quash down how she’s behaving."

How does Tina feel about the challenge of portraying this difficult period for Sarah? 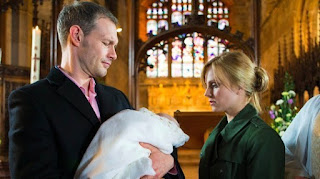 “For me personally I think it’ll be the hardest thing I’ve ever played. I’m so excited for it because of that, because it will really push me, but I’m anxious that I want to obviously do a good job.”

What happens in the church?


“They’re at the font and he’s putting water on the baby’s head and basically Harry cries a lot, and I think she’s got it into her head that because he’s crying so much, something’s wrong, or that he’s somehow going to be like his Dad and so when he’s crying when he’s having the water put on his head, I think she thinks, that’s it, nothing’s ever going to be right again so she literally runs out of the church and then Billy comes to find her and she’s like, 'I just wanted everything to be perfect'. I think a lot of that scene is about what isn’t said, and I think a lot of the scenes are going to be like that.”

What do you make of the storyline with Bethany?


“It’s a different world now and it scares me seeing my daughter growing up - I don’t know what you allow, what you don’t you allow. I think for Coronation Street to show Bethany, who is such a feisty character to her family, showing her more vulnerable side and how those girls are bullying her, it’s good. I really enjoyed being able to do the scene where I go round to the house, getting to do what every mother wants to do.” 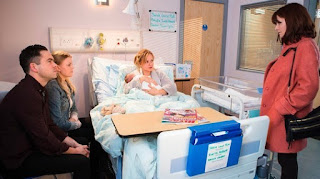 Does the arrival of Callum’s Mum back on the scene bring everything to the fore again?

“Because Callum clearly was not a very nice man, I think her fear is quite grounded in reality in that, ‘I do not want Marion anywhere near my baby, because if he can turn out like that, her influence could make mine [the same]’. [Sarah] is very irrational, but again a lot of that is overtiredness. Obviously Sarah had a previous pregnancy with Billy and she lost her son at a late stage, and I think she’s never really got over that. I think a lot of that will stick”.

Are you looking forward to the day when all the secrets come out?

“For any actor working on this show it’s more fun when there’s drama going on, so yeah.”

Has she thought about what she’ll tell Harry about his Dad?


“There’s a lot of denial going on. I think she’ll probably hope that she can tell him what everybody else thinks, which is that he’s gone somewhere and just never came back.”

I had to take the opportunity to tell Tina that I thought her performance in the live episode was brilliant and I asked her how she prepared for it, and how she felt afterwards.

“I learned my lines as well as I could. Weirdly I had to listen to a lot of affirmations to help me relax because it felt so much bigger than me, because obviously it was. On the first day of rehearsals we walked into a room [with] 600 people and Stuart the producer stood up and said this is such a big thing. I thought, if I mess this up, not only am I messing it up for the 600 people involved, then I’m messing it up for all the people at home. So I must admit the nerves were pretty intense but it was the most amazing experience.”

“Yeah, never say never, I certainly don’t look back and think, ‘oh my god, what was I thinking?’ I loved it, I loved every second of it.”

I really enjoyed my interview with Tina. Articulate, interesting and passionate about her work, I think the following answer to a question about bringing your own experience to bear when playing the part sums up her outlook very well.

“Life experience in general is just very good for this kind of job. It’s not a standard job. At the end of the day we’re putting on clothes and pretending to be someone else, we’re not saving the world, but what we do get to do is try and portray something in as believable a way as possible. Learning the lines is easy, it’s actually trying to make it real that’s the hard bit I think.”

I felt Tina's performance in the live episode and its aftermath really showed what she's capable of as an actress, and I look forward to seeing her rise to the challenges which lie ahead for Sarah.