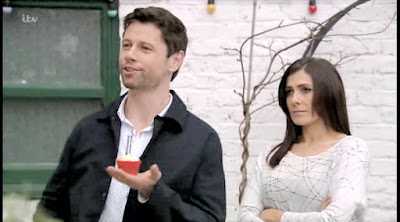 Love Rat award: I don't trust Will. He has absolutely no respect for either his own fiancee or Michelle's marriage and is determined to prey on her vulnerability.


Domestic award: Nick is cooking for Carla. Dinner's on the table!

Dressed to cheat: Michelle felt she'd been let down one too many times by Steve so she's in short skirts and deep cleavage and a full face of slap, determined to get some validation from the smarmy Will.

Grasping and Greedy award: Phelan might say they have to do their bit for the community but he's also going to charge Yasmeen to put the community centre right, even if it is Mates' Rates, at least so he said. 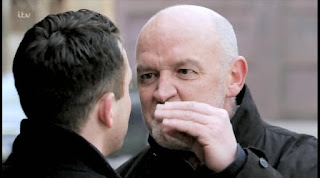 Mark your Cards: I think Todd is probably a much more worthy opponent than Michael was. He's certainly slyer but he probably shouldn't have tipped his hand so early.

Stylin' award: Really liked Zeedan's outfit, from the skull shirt to the zips on his trousers.

Lines of the week:
Phelan "It's a building job, not a fashion show"
Phelan to Todd "Shouldn't you be playing with your pansies?" Todd "Wow. Homophobic, pig ugly and twisted. My mum's really hit the jackpot this time."
Sally "Not triangles for serviettes, Sophie, we're not a motorway service station" (chuckle)
Gail "I love it (the cake) as long as it doesn't become my new nickname" David "To No Nuts, everyone!"
Todd about Eileen "I reckon if Jack the Ripper turned up on her doorstep with a bunch of dead carnations, she'd call him a Top bloke, too.
Bethany to David "All right, keep your unfashionable hair on"
Sally "It'll be on your empty tomb. 'I would've been here but I got waylaid'"
Rita "Sally is many things but she's no fool"
Michelle "I'm 40 years old, I know what I'm doing" (no, you don't)
Todd "Know your enemies is what I've always said" (I think Phelan's card has been marked)