Lovely wedding vows... toilet seats and dirty socks? Run away Fiz! No.. really! It was nice of Fiz's friends to throw her a party though. Thing is she weeps and wails about how awful it is to be newly married yet alone. All she had to do was wait a few more weeks, silly cow! I know she thinks they'll move away but apparently John has other ideas. Did i say lately that i think he's a manipulative selfish creep? Chesney agrees with me and I agree with Chesney! Poor Chesney is so beside himself that he is moving in with the Windasses. John figures by writing to all the neighbours, that will smooth things over. Oh yeah? Sally will paper her conservatory with them first! She's on a crusade to run Stape and Fiz right out of town. I'm glad Roy and even Ken stood up for Fiz and John at the kangaroo court Sally held in the pub. Even Fiz standing there didn't stop her ranting. Well Fiz certainly made Sally look like a nobhead.

Why would Fiz go to take her ring off when she came into the factory and shush Janice when she called Fiz Mrs. Stape? They all knew she got married, most of them were at the party, too. It's not as if Sally and Rosie wouldn't find out. Then Sally went off on her and everyone else seems to be against them too. You know, i understand why Sally is so against Stape, i really do, but but she really goes over the top into mean and nasty with it and it's not really any of her business telling Fiz where she can and cannot live.

So much for Rosie being sacked. She's an investor, it's a bit tricky. But being an investor, as Luke pointed out, she'd be on the hook if Fiz sued for wrongful dismissal so Rosie had better hold her tongue. I bet Fiz could sue for harassment at the very least even if she didn't get sacked. Mind you, Fiz was supposed to start back at work on "Monday" and pulled a sickie. How does she manage to stay employed? Maybe i could work for Luke too! 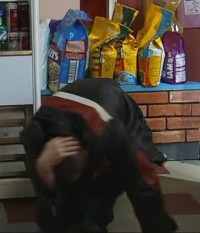 Oh my god, Umed installed a new shop doorbell. "To create a mood".... and Kirk nearly hit the floor when a machine gun went off for him. The bells had me snickering all through a few episodes. Made an amusing contrast to Amber moaning and griping about Dev paying off Darryl. Well i don't blame her, mind you. It was a pretty stupid thing to do but on the other hand, Darryl *did* take the money at first. But Teresa was the one spilling the beans. She might have had the end result by keeping Darryl and Amber split up (and she picked up the cheque from the ground!) but she also drove a wedge between father and daughter. Then Ashley nearly went spare and Graeme had to soothe the savage breast! LOL well he sorted the bell anyway. "Oops!"

Tyrone wondered why Molly hasn't gone to the gym in a couple of weeks... (oh say since Kevin was on holiday? but the dim little pet doesn't connect the dots, sadly) Does nobody wonder why Kevin is suddenly keen to go running again (since Molly got back)? Does Kevin not realize that Glasgay isn't a play on the accent? Now "MolVin" have uttered the L word. (gag) It just gets worse and worse, and makes them and this storyline more and more insufferable. Molly's happy to take what she can get? How much you wanna bet she'll be giving him an ultimatim within weeks. I'm done with this one for the week. Fill in the blanks yerselves and read my official stand on this debacle here. Someone make it stop!!!

Jesse sure got an eyeful of Julie's backside. Does he have a roving eye? Eileen doesn't trust him but really, has he ever given her any reason not to? i didn't think so but she's jealous none the less. He's really not very bright though, is he? Thinking he can pretend he's not working with Julie and having them sneak around to their gigs? You know that's not going to last too long. 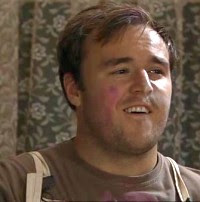 Ashley is getting pretty sexually frustrated. I guess Claire is still a no-sex zone until he has his bits done. So frustrated that he took it off on Umed's doorbell. Peter is a bit wobbly, isn't he? I really do think Peter and Leanne make a good couple. There must be a transporter on that train. Kev and Molly got from Weatherfield to a hotel in Chester in the amount of time it took Graeme to "clean" the front window of the shop. And incidental music while they were away, Sorry Seems to be the Saddest Word. Ironic, no?

You might remember hearing Roy and Hayley talking about a visit to Romania for Frankie Baldwin's wedding? That was another one of those spinoff DVDs that was released last fall in the UK. I shall be providing an update of the dvd storyline in the next little while, with photos!